Baby DogeCoin makes it to the trending list on Twitter following a single tweet by Elon Musk which seems to have changed the fate of Baby Doge. Elon Musk has once again lavished his inexplicable power over the crypto market by uplifting yet another meme coin from the depths of uncertainty to the heights of potential. Following the tweet from Musk, the price of the cryptocurrency saw an all-time surge. It can be said that Musk’s preferences are as frivolous and volatile as the crypto market. You never know when the change will strike the shore with Elon Musk. Here is the tweet that proved to be a miracle for Baby DogeCoin.

It is better to refrain from contemplating whether this is yet another joke from the Tesla CEO. Whether a joke or not, it has clearly helped Baby Doge from becoming a joke(though we cannot really put a period on that yet).

Baby Doge stepped into the crypto domain in June, created by a set of DogeCoin enthusiasts. Taking its inspiration from DogeCoin, Baby Doge is created with the working principle of rewarding long-term holders. According to the creators, Baby Doge will always prioritize the community over anything else. We can only hope that the coin turns out to be as adorable as its appearance suggests in the long run. Another highlight of the coin is that the proceedings from the coin will go to the dog shelters across the US. Community coin with a charitable front, and we can see adorability scale hitting a high already. 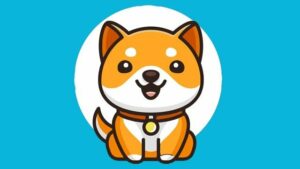 The sudden rise to glory of baby dogecoin is yet another instance of the frivolity of the crypto market which can hang by the thread. And let’s not fool anyone, more often than not, the ‘thread’ is a tweet by Elon Musk. The sudden surge of the baby doge is quite overwhelming. However, the question that comes with these abrupt changes is whether it can be trusted and whether or not it is worthy of long-term investments. Because the fortune which changed for the better in a day can also change for the worst the next day. This is an underlying rule every crypto enthusiast is aware of, particularly in the context of the current market situation. Thus it will be prudent to think twice before taking the next step.

Not so surprisingly, the single tweet from Musk has had the usual effect on crypto enthusiasts. Because soon after the tweet, baby dogecoin hit the trending lists on Twitter. Musk has scattered the magic dust over baby doge and the miracle has been reflected in the graphs, and soon enough on the social media platform which thinks baby doge deserves a pat on the back after all. Here is a set of the reactions and responses from Twitter.

Let’s hope that the magic does not fade away when the clock strikes twelve.

Babydoge ✨⭐
This is a masterpiece, miracle & the Elon musk magic!
What a multimillionaire performance 💥🚀
Target – 5 billion $ this year
With together holders love & support yes we can! 💞🔥💥🚀
We'll make our babydoge successful 🤗#BabyDogeCoin #BabyDoge #BabyDogeArmy pic.twitter.com/5gSgCX1j7B

Elon Musk is to crypto what Tony Stark is to Avengers.

The excitement is valid. However, it will also be wise to keep in mind that in the case of crypto, the distance from the moon to earth is not that long.

Little late as were actually about to hit 290,000 holders ! pic.twitter.com/dWKTpBcPeQ

Refueling is not really a bad idea. Just saying.

Well, for the record, it has been a while since the crypto market has seen an upward-pointing graph. Therefore you cannot blame people for getting excited.

It might be wise to learn how to handle it well.

Too cute to handle🥰😍 #BabyDogeCoin pic.twitter.com/ae06c0KLsm

Crypto market spotlight changes in the blink of an eye. You never know who will take the throne the next day.

Wow Everytime I open TWITTER/FB/IG ect all I see is the famous #babydoge #babydogecoin #BabyDogeArmy 👑👌💪🙏🙌
Love seeing #babydoge shared worldwide. Keep it up #babydogefamz #babydoge loves us all LESSSSGOOOO🔥🔥🔥🔥 pic.twitter.com/zWuy4agnFv

When it comes to crypto, it is rather hard to keep a skeptical eye at a distance. The changes are so abrupt and the ground too shaky to be completely convinced of the durability of success and growth. But then again, success is not free of challenges and risks. Thus all we can do is to keep an eye out for the future and be on guard. Because it is always preferable to prepare and soften the fall than to fall headfirst into the ground.