One of the biggest risks banks face when dealing with cryptocurrencies is being shut out of the market entirely. Despite the fact that digital assets are “extremely volatile and speculative,” Commonwealth Bank of Australia CEO Matt Comyn believes institutions must be involved in the adoption of the technology that underpins crypto and the insatiable demand from clients to trade them. 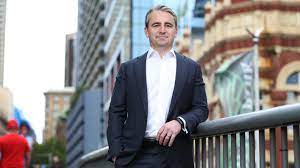 “We see risks in participating, but we see bigger risks in not participating,” Comyn said in an interview with Bloomberg Television in Sydney. On Friday, the country’s biggest bank announced that it had purchased a tiny share in cryptocurrency exchange Gemini Trust.

Tyler and Cameron Winklevoss launched the exchange, which was looking for capital at a valuation of $US7 billion ($9.6 billion). The bank is also cooperating with Gemini to provide secure storage for the tokens that its customers buy and trade.

As regulators throughout the world wrestle with laws and frameworks for the still-nascent business, fears about possible risks abound. Jobs are being advertised by banks ranging from JPMorgan Chase in the United States to DBS Group in Singapore, in a race for competent staff that Comyn claims is rare.

“It’s crucial to note that we don’t have a position on the asset class as a whole – we perceive it as a highly volatile and speculative asset,” Comyn said. “However, we don’t believe the sector or technology will go away very soon.” So we want to learn about it and deliver a competitive solution to clients with the appropriate risk disclosures.”

Spectacular increases in digital assets in recent years, as well as increased investor interest, have prompted more debate over the relative merits of central-bank digital currencies.

The Reserve Bank of Australia stated on Thursday that it is not convinced that one is required in Australia. “Many central banks are considering the feasibility of a central-bank digital currency, what that would look like, and what the benefits would be,” Comyn said in the interview.

“Once again, that’s something we’d like to do.” We believe it is critical that Australia develops competence and pilots many potential scenarios. We’re hoping to play a part in that.” he added.

“There is a big divide between what the market is expecting and how that translates into wages, and into strong demand for labor next year, versus what the central bank is currently forecasting. Our view is there’s going to be strong economic growth in 2022, a very low unemployment rate, some of those supply chain issues will persist, and we will see some higher inflation certainly than we’ve seen for many years.” Comyn said on inflation.