This could mark the start of a grand collaboration between Isaacman and SpaceX. This puts their plan on track to travel way deeper into space, more than any human who has traveled yet in the past 50 years.

The three flights are reportedly being named “Polaris” after the North Star. The first of this planned for launch later in 2022 and is expected to last about five days, including three more heads other than Isaacman.

The crew is planning to conduct a space walk during the Polaris mission, announced Isaacman. Jared Isaacman is known to have bought “Inspiration 4” the first ever SpaceX all-tourism flight. He assured the first ‘Dragon’ mission to be followed by another one.

“We’re gonna go farther into space than humans have gone since we last walked on the moon,” he told the Today show. 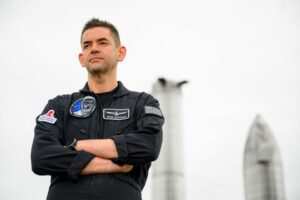 The Polaris missions are expected to support the same cause as ‘Inspiration 4’. As a fundraiser for St. Jude Children’s Hospital, they fetched a sum of $243 million. It was funded by Isaacman’s donation of $100 million and Musk’s donation on $50 million, and rest from public donations.

Air Force fighter pilot, Scott Poteet is set to join Isaacman on the Polaris Mission. Along with him, operation engineers of SpaceX, Sarah Gills and Anna Menon will act as onboard medical officers. This makes Jared Isaacman the only crew member having prior spaceflight experience.

Preparations for the mission:

While laying out details, it was observed that while in orbit, the spacecraft will require a considerably heavier duty system of protection. NASA is set to upgrade the extravehicular activity (EVA) spacesuits with protection. They describe it as “a miniature spaceship shaped like a human body that protects the astronaut from the dangers of being outside a vehicle while in space or on the Moon.”

Though much of the details are still undisclosed, it is being said that the space walk is going to conducted at a particular altitude. It will take place when the Crew Dragon is flying at an estimation of 300 miles above the earth, approximately the same altitude as the International Space Station.

Along with the numerous new equipment being tried out in the mission, Crew Dragon is also set to test out the use of ‘Starlink’. ‘Starlink’ is SpaceX’s internet business based in satellite and will be used for in-space communications.