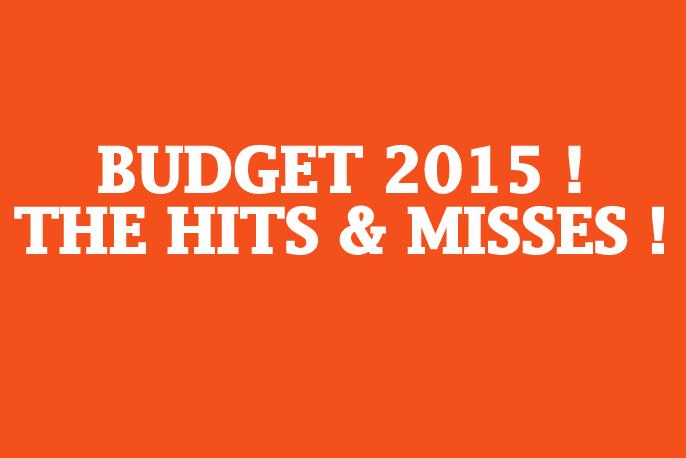 Startups were surely in focus like never before when our Finance Minister Mr Arun Jaitley proposed the Budget for 2015-2016 on 28th Feb 2015. There were a lot of initiatives announced for the startup and entrepreneurial community. And a lot of initiatives still remain un-addressed. Here is a look at what the #Budget2015 looks like to the startup community in the country. The Hits and the Misses !

The setting up of the SETU (Self-Employment and Talent Utilization) fund has been hugely welcomed by the startup community. This has been the highlight of the budget s far. Under this fund, the government will  launch an incubation center in order to create opportunities for self employment and new jobs particularly in technology-driven areas. The centre has allocated Rs 1000 crore for this purpose.

For engaging our youth for inclusive and sustainable growth of the country, concerns such as more liberal system of raising global capital, incubation facilities in our centres of excellence, funding for seed capital and the ease of doing business need to be addressed to create a 100,000 jobs and hundreds of billions of dollars in value

With this objective, the government is creating a mechanism known as Self Employment and Talent Utilisation (SETU) to be techno-financial incubation and facilitation programme to support all aspects of startup business and other self employment activities particularly in the technology driven areas.

I am setting aside Rs 1,000 crores initially for this purpose.

Mr Jaitley said about setting up the SETU Fund. According to the Economic Survey 2014-15, India has emerged as the world’s fourth largest hub for startups with over 3,100 of them, driven by “hyper growth” in technology and software products in the country.

#Budget2015 FM has stated clearly the Govt’s focus on startups n entrepreneurship to make job creators not job seekers – music to my ears!

To boot entrepreneurship and to make it easy to start your business, Budget 2015  has pitched for the widespread usage of the recently launched e-biz portal. The portal integrates 14 regulatory permissions at one source. Widespread use of this portal is expected to help enable faster clearances for setting up businesses.

States are embracing and joining the e-biz platform. However, if we really want to create jobs, we have to make India an investment destination which permits the starting of a business in accordance with publically stated guidelines and criteria.

I intend to appoint an Expert Committee for this purpose to examine the possibility and prepare draft legislation where the need for multiple prior permissions can be  ..

Finance Minister Arun Jaitley said while presenting the Budget 2015-16. According to experts, if this platform is implemented correctly, it could be the single-most important development to improve the ease of doing business in India.

During the budget the government has also called for promoting cashless transactions in the economy. The government will incentivize spending through debit/credit cards to encourage India to become a cashless economy.

In this regard, Jaitley proposed that the economy go cashless through RuPay ,domestic card scheme under the National Payments Corporation of India (NPCI),debit cards for every citizen.

This move will certainly give a major boost to startups/enterprises working in this space like PayU, My Mobile Payments, Momoe, iKaaz, etc. Even Prime Minister Modi in last month called for promoting cashless transactions, saying these could be the best solution for the problem of black money.

Several entrepreneurs in the MSME sector have often complained about lack of or difficuty in getting finances to run their business. Often, while applying for loans, these companies are asked for large collaterals by the banks, which made their business unsustainable.

The Budget addresses this problem by setting up of the  Microfinance Unit Development Refinance (MUDRA) bank.

I propose to create a micro units development refinance agency, Mudra Bank with a corpus of Rs 20,000 crore and credit guarantee corpus of Rs 3,000 crore.

These measures will greatly increase the confidence of our young educated and skilled workers who are able to become the first generation enterprises, and existing small businesses will be able to expand their activities. Just as we are banking the unbanked, we are also funding the unfunded.

said FM Jaitley in the Parliament. The bank is especially aimed at promoting entrepreneurs from the reserved classes in the country.

During the Budget 2015, Mr Arun Jaitley launched the Atal Innovation Fund (AIM).AIM will be an innovation promotion platform involving academics, entrepreneurs and researchers. About the fund Mr Jaitley has said.

The AIM platform will also promote a network of world-class innovation hubs… Initially, a sum of Rs.150 crore will be earmarked for this purpose.

Indian economy is a super giant on the move. AIM will be an innovation promotion platform involving academics, entrepreneurs, researchers to draw upon national and international experiences to foster a culture of innovation, R&D and scientific research in the country. The platform will also provide network of world class hubs and grand challenges for India.

In a bid to allow greater access to new technology for their business, Finance Minister Arun Jaitley has slashed royalty tax paid by entrepreneurs from 25% to 10%.

What were the Big Misses in the Budget ?

The startup communiy was expecting the Angels Tax to be eliminated. Section 56 of the Income Tax Act which taxes start-ups on investments they receive from angels.  To remain out of the purview of Section 56 of the Income Tax Act, a start-up has to be incorporated abroad or it has to raise money from overseas investors.But if there is an overseas investor who is investing in an Indian start-up, then Sec 56 doesn’t apply.While talking to Techstory about the Angels Tax  Mr V Shankar of The Chennai Angels  hadsaid “Sec 56 (2) vii of the Income Tax Act states that if shares are issued by start-ups to Angels above book value (<=Rs 10), the excess is treated as Income of the start-up and taxed @ 33%. Since most start-ups have all the value captured in the IP, and a book value of zero, they will have to pay 33% of every angel round as tax. This is clearly a very big negative and we look forward to its elimination.This would be at the very top of our wish list.”

There were no comments about the Angels Tax in this Budget !

In July 2014,during the first budget by the new government, Union Finance Minister Arun Jaitley in his speech announced the setting up of a Rs 10,000 crore fund to boost capital flow to startups and small and medium enterprises (SMEs) in the country. The startup community was unhappy about the fact that there was no further light thrown on the implementation of this fund and expected more information about the same in the Budget. The Budget has however not said anything about this fund.

#Budget2015 Much like last time, FM promises Rs 1,000 crore corpus for establishing a mechanism to facilitate #startups. Will we see it?

Prevention is better than cure and we applaud the finance minister’s efforts to focus on preventive healthcare for our citizens by targeting 6 crore toilets under the Swacch Bharat campaign. This will have a huge impact on making our nation healthier.

We’re also happy with  government’s increased focus and recognition towards the Indian Start up industry. Over the last few years, the Indian Start up industry has witnessed tremendous success in providing innovative services to the nation, along with generating substantial employment opportunities . The financial allocation of Rs 1000 cr under the SETU – Self Employment & Talent Utilization program will drastically help boost the start-up ecosystem in India. The additional focus towards the strengthening of the IT infrastructure, the backbone of the Indian start up industry will accelerate the industry growth.

As a young company at the intersection of health and technology we’re very pleased with the government’s focus on both these sectors and look forward to working with various stakeholders to improve healthcare access for a Digital India.