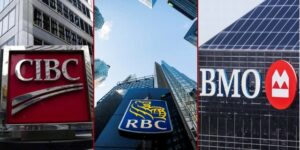 This week, five banks in Canada, the leading ones in the country, went offline out of the blue. They faced a major outage of almost five hours blocking access to their primary functions. Online and mobile banking facilities were said to be out, along with access to e-transfer for the customers.

The banks that were hit by the outage in Canada were: the Canadian Imperial bank of Commerce (CIBC), Royal Bank of Canada (RBC), TD Bank Canada, Bank of Montreal (BOM) and Scotiabank. Electronic transfers, along with its online and mobile banking facilities were offline for more than a couple of hours.

The users were reportedly sending in complains all day about facing difficulties to access their online banking system. The reports peaked between 5 p.m. and 6 p.m. in the evening, Eastern time on Wednesday, February 16. What had then struck the citizens was the fact that all five banks went offline together.

A representative from Royal Bank of Canada confirmed in a statement that the bank was then ‘experiencing technical issues’ with their phone systems, along with online and banking systems.

Reactions of the banking customers:

“Our experts are investigating and working to get this fixed as quickly as possible, but we have no ETA to provide at this time. We appreciate your patience.”

Customers were seen to take to social media express their grief regarding the system outage:

Customers of the Bank of Montreal also reported an all day outage of the bank’s service that offers “Global Money Transfer”. The representative of these particular bank, did not give a reason but suggested the users to contact their customer support.

The mobile banking app of TD Bank also blocked out heir users and offered highly poor customer services. Their responses were considered vague for they blamed their superiors for not having advised them of the recent online issues.

The suspected reason behind the outage:

They real cause of the Hours-long outage is still unknown. However, many argue that the timing was, in fact, intriguing. This was just a few days after the Canadian Prime Minister brought forward the Emergencies Act. Prime Minister Justin Trudeau had then invoked it in the midst of the ongoing protests for the ‘Freedom Convoy.’

Deputy Prime Minister Chrystia Freeland explained the new rules at a Parliament Hill press conference on Monday, February 14. The new regulations entailed the necessary for payment service providers to follow the guidelines of the Emergencies Act that was invoked.