Capital of Russia, Moscow celebrates the globally largest EV bus fleet consisting of 900 battery-powered bus fleets. The company that runs the bus and tram network in Moscow, Mosgortrans showed several pictures of a beautifully decorated battery-powered bus fleet. This year hundreds of buses were added to the fleet, and thousands are expected to be added in coming years. 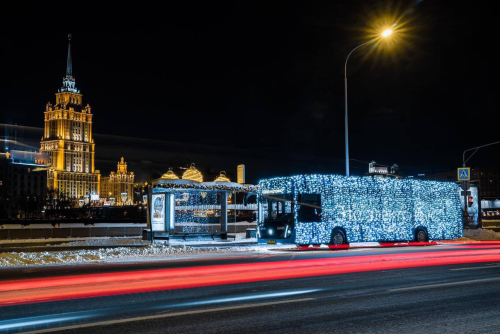 Considering that there were some 500 electric buses deployed as of November 2020, the city has added 400 units since then and is not far from its 2021 target of 1,000 electric buses. Most of the vehicles were supplied by Kamaz, powered by lithium titanate batteries (LTO).

By the end of this decade, Moscow intends to switch all its buses to electric drive, and purchases of regular diesel buses were already put on hold. Mosgortrans announced that EVs are used on 66 routes with a total length of almost 800 km (497 miles) and cumulatively carried more than 150 million passengers over a few years (including 77 million passengers in 2021). The city has over 150 fast-charging stations, but it’s just the beginning. By the end of 2023, there will be up to 500 stations.

The electric bus fleet is expected to expand in 2022 and 2023 reaching more than 2,000 vehicles. By the end of 2024, there might be more than 3,000 units. As far as we know, only cities in China have a higher (significantly higher) number of battery-electric buses, although the electrification trend is clear also in Europe. Electric buses had a noticeable share (6.1%) in new purchases in the European Union already in 2020. In North America, electrification is not yet as spectacular, but we saw a few three-digit orders so maybe it will take off later this decade.

Russia is known to have very few battery-powered vehicles, much behind that other countries. However, with this, it turns out the country is far ahead in terms of public transport carbon emissions. While the countries in Europe, the US, and the UK are focused on pushing EV sales by replacing the existing gas-powered vehicles. This Christmas Russia is showing its electric bus fleet. Elon Musk said earlier this year that Tesla once was about to plan a manufacturing plant in Russia. Being the market leader in electric vehicles, Russia did welcome Elon Musk’s Tesla. However, there are no updates about the plant from Tesla yet. Regardless the country’s growth direction in the automotive industry seems to be unique, unlike traditional EV push.

Credits for the data about fleet and routes- InsideEVs