Cardano (ADA), the sixth-largest cryptocurrency by market capitalization, just reached a significant transaction milestone. Cardano, the world’s largest proof-of-stake (PoS) blockchain, has officially surpassed the 20 million transaction mark. Furthermore, the fact that this was accomplished without a single day of interruption on the Cardano network is extremely impressive; It just announced that Cardano had twice the transaction volume of Ethereum, at $18.24 billion, as of November 15th. 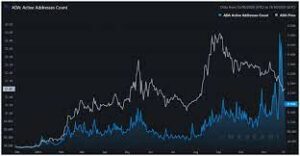 According to data given by Cardano Daily, Cardano recorded $18.24 billion in transaction volume over time, placing it second behind Bitcoin.

The latest breakthrough was uploaded on Reddit by user Jem Colley, and it’s currently trending on the ever-growing Cardano community. The Cardano blockchain has remained stable for 1,522 days without experiencing any downtime, while other rival blockchains have encountered downtime on several occasions, according to the anonymous user.

The performance of the Cardano market

Due to its poor performance in the market, ADA has received a barrage of criticism in recent weeks. Investors were particularly concerned about the digital currency’s price stability as the value of other cryptocurrencies increased.

The price of Bitcoin (BTC) has been relatively constant since the beginning of November, but rises in many other cryptocurrencies have combined to catapult the entire cryptocurrency market to a new all-time high this week.

Ethereum (ETH) hit a new all-time high on Wednesday morning, soaring beyond $4,600 for the first time in its history, thanks to an increased usage of its blockchain network.

Polkadot (DOT) and Solana (SOL) both hit new highs, with the latter aiming for $75 and the former achieving a new all-time high of $250 on Thursday, November 4, before sliding back to $137 at the time of publication.