Facebook stated on Wednesday that it would modify a long-standing policy that prohibited most cryptocurrency companies from running ads on its platform. The decision comes after the startup, now known as Meta, attempted and failed to launch a cryptocurrency that could be used to transmit money online to anyone in the world using Facebook tools. 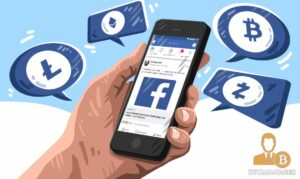 On Tuesday, David Marcus, the head of Facebook’s cryptocurrency operations, announced that he will be departing the business at the end of the year. Advertisers could previously submit an application and additional information such as any licenses they earned, if they were sold on a public stock market, or any other relevant public background on their firm, according to the company.

The company is increasing the number of regulatory licenses it takes from three to 27 in the future. “We’re doing this because the cryptocurrency ecosystem has continued to grow and stabilize in recent years, with more government regulations creating clearer norms for their industry,” the company added.

In January 2018, the corporation banned cryptocurrency ads, but in May 2019, it eased the restrictions slightly. Start-ups in the Bitcoin and blockchain areas were unable to promote their work and reach potential clients on Facebook and Instagram due to the prohibition.

The company’s new policy, according to Henry Love, a former staffer on Facebook’s small business team, is huge for the crypto industry and will allow more retail investors to acquire cryptocurrencies than ever before.

“We will see more acceptance for the cryptocurrency sector and the metaverse than ever before with more openness and transparency for what crypto companies can accomplish,” said managing partner of Fundamental Labs, which has invested $500 million in the cryptocurrency industry since 2016. “For mass acceptance, this is a game-changer.”

“These businesses had been unable to advertise on Facebook due to a technicality. They couldn’t persuade consumers to switch fiat currency to cryptocurrencies,” said Hasan, CEO of Retina AI, a social media marketing firm that helps firms target high-value customers. “This will make it possible for the average individual to do it.”

Over the last year, Facebook has drastically pulled back its cryptocurrency ambitions. Following the announcement of plans for a currency and a digital wallet in 2019, Facebook was met with a barrage of criticism from lawmakers and authorities throughout the world.

Novi, the company’s digital wallet, was ultimately released in October. However, digital money, now known as Diem and managed by an independent organization, is still unavailable to the general public.

Also read: Having lost $8,000 in an altcoin scam, man started a website that tracks down crypto fraud