China cuts benchmark lending rate in nearly 2 years The People’s Bank of China lowered the one-year loan prime rate to 3.8%, down from 3.85%.

China cut its lending benchmark loan prime rate (LPR) for the first time in 20 months on Monday. In a bid to prop up growth in the slowing economy. Although it remains wary of loosening conditions in the country’s highly leveraged property market.

On Monday, the People’s Bank of China said it lowered the one-year loan prime rate by 0.05 percent to 3.80 percent. It was the first-rate cut since April 2020.

The last time the central bank cut the one-year and five-year LPR was in April 2020, according to data from Wind Information. 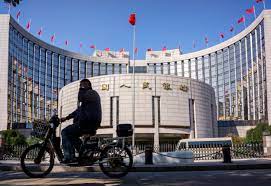 The People’s Bank of China (PBOC) cut the amount of cash that banks must hold in reserve last week. Its second such move this year, releasing 1.2 trillion yuan in long-term liquidity to bolster slowing economic growth.
While Beijing’s move to lower the LPR was widely expected. It also highlights China’s monetary policy divergence from other major global central banks, which are set to raise interest rates.

The LPR affects lending rates for corporate and household loans. Last week, the central bank’s cut to the number of cash banks need to have on reserve took effect. That marked the second such move this year.

Yan noted that the reduction of the one-year LPR may have a positive impact on the consumer market by inspiring consumers to purchase more. The five-year LPR will remain unchanged because the policymakers aspire to control property bubbles and inflationary pressure.

The world’s second-largest economy faces multiple headwinds heading into 2022. Due to a property downturn and strict COVID-19 curbs that have impeded consumption.

“We believe Beijing may have to step up significantly its policy easing measures, including dialing back some property curbs in spring 2022 to prevent a hard landing,” Ting Lu, chief China economist at Nomura, said in a note.

“We may see another 50 bp RRR cut in H1 2022, but still view the likelihood of a policy rate cut as quite small, due to elevated PPI inflation and rising CPI inflation.”

Most new and outstanding loans in China are based on the one-year LPR. The five-year rate influences the pricing of mortgages.

A slew of recent economic indicators, including retail sales and investment growth, point to a slowing economy. While a regulatory clampdown on the tech sector has dampened investor sentiment, and new curbs to fight rising COVID-19 cases could pressure growth.