Shares of Coal India (CIL) hit an over two-year high of Rs 205.55, up 4 per cent on the BSE in Wednesday’s intra-day trade. It is surging as much as 10 per cent in the past three trading days on the expectation of strong earnings.

The stock of state-owned mining company traded at its highest level since January 2020. In the past three months, the stock has rallied 25 per cent, as compared to a 5.4 per cent decline in the S&P BSE Sensex.

The development comes only two days after a report by Japanese financial services firm Nomura highlighted that the coal inventories held by the Indian power plants remain tight at nine days’ worth of stock as of mid-April and it could result in power outages.

The report, titled ‘India: A power crunch in the making’, also noted this coal shortage could lead to another “stagflationary shock” if the situation does not improve. Besides this, it could also result in the diversion of coal from non-power sectors like aluminum, cement, steel, weighing on industrial output and this could increase the cost of electricity.

The nine-day worth of stock is much lower than the average stock of 17 days held in April over the last five years. Nearly 100 out of the 172 power plants in India have critical coal stocks, which means it is less than 25% of the normative levels. 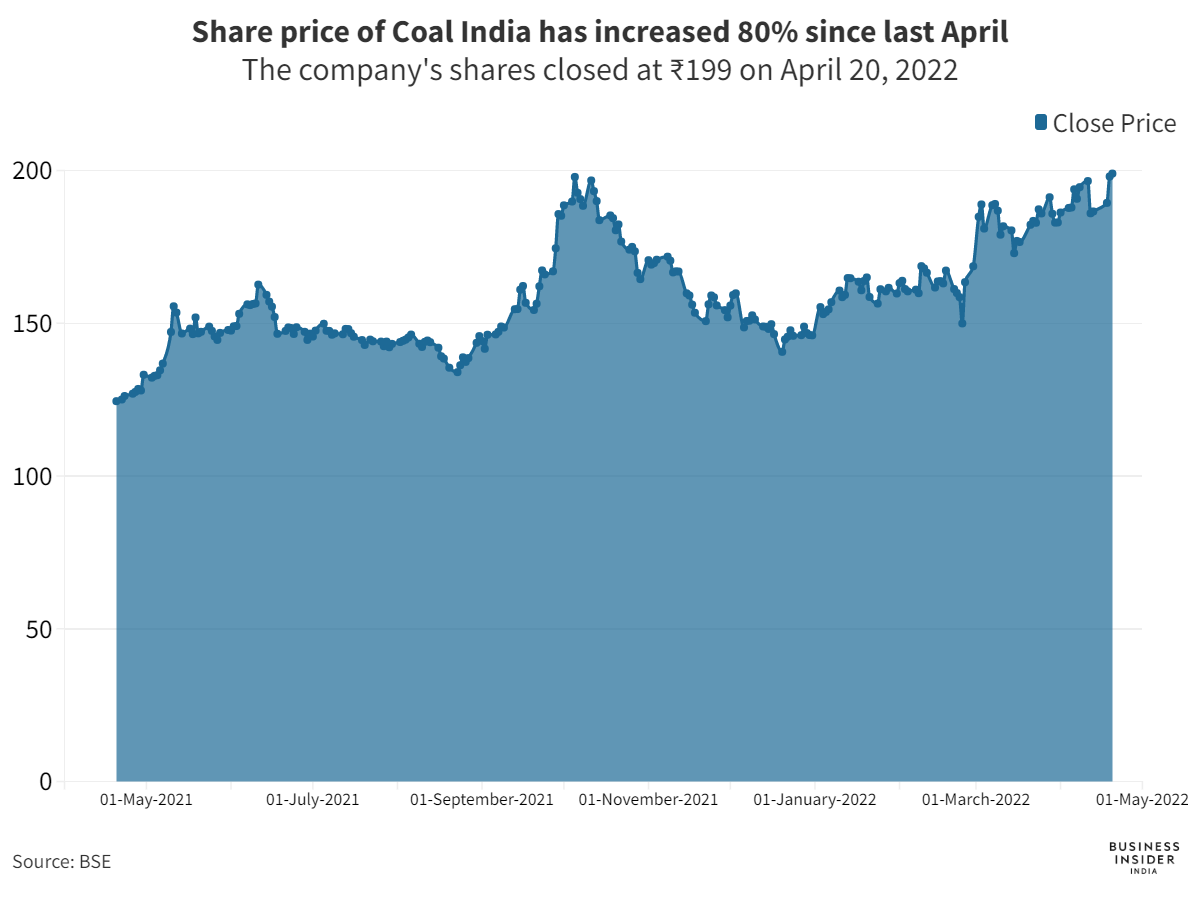 Coal India said amid the spiraling power generation, it raised its supplies to thermal power stations by 14.2% during the first half of April’22 compared to the same period last April. Its supplies have hit 1.64 million tonnes (MTs) per day during this period against 1.43 MTs in a similar period in April’21.

The country’s total power generation was 9.5 percent higher, at an average of 4.53 Billion Units (BU), till 15th April’22 over the same period last year. The increase was 400 million units per day against the average generation of 4.13 BU for the comparative period.

However, the escalating power demand-driven up by the post-pandemic economic buoyancy and hotter than normal summer seems to dwarf the upsurge in power and coal supplies. Nonetheless, shares of the company spiked another 5 per cent to 198.

The price of domestic coal is deregulated. CIL determines the prices of domestic coal based on factors such as costing, future projects viability, changes in inflationary cost indices, and competitiveness with imported coal.