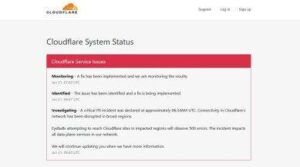 Cloudfare outage this week briefly take down several websites across the globe.
Source: The Indian Express

This week, a sudden outage at Cloudfare resulted in taking down several websites across the world on Tuesday, June 21. This outage at the popular CDN choice for companies left many of these sites entirely inaccessible to its public users.

Specifically, the websites suffering an outage included Canva, Streamyard, Discord, along with the official page for the startup Nothing, based in London. Thankfully, Cloudfare was rather quick to acknowledge the outage issue through a post on social media platform Twitter. Soon following this, it announced that it was already working on a solution to the problem. Currently, it looks like the issue has been resolved for at least majority of websites that bore the brunt of the sudden outage.

The Cloudflare team is aware of the current service issues and is working to resolve as quickly as possible. Updates can be followed here. https://t.co/22Yiyu3lKJ

In the tweet, the team of Cloudfare expressed that they were familiar with ongoing service problem. Moreover, Cloudfare gave the assurance it was ‘working to resolve’ it as fast as possible. Soon afterwards, it posted that it had ‘identified the problem’ and was in the process of implementing ‘a fix.’ Subsequently, they confirmed the successful implementation of the fix, and were then in the process of keeping track of ‘the results.’

Various news outlets later on confirmed that the several websites which were down for the time span were successfully running after the implementation of the fix. This included the sites of Streamyard, Canva and London startup Nothing. At the time of the outage, the pages of these sites reportedly showcased a ‘500 Internal Server Error’ for most of the users. In fact, these users were entirely left with having no access to these websites, along with their corresponding specific pages.

The sites affected during the outage:

Estimates from DownDetector, an outage reporting website, showed that serious outages were reported for numerous sites which included Twitter, Amazon Web Services, Shopify, Canva, Medium. com, Social Blade and Zerodha. Along with it, the outage went on to affect Valorant the popular battle shooting title, and the even Genshin Impact, the open world game.

Additionally, other affected websites include Splunk, Udemy, Quora, and Crunchyroll which were down for a while too. In fact, even Crypto exchanges such as WazirX, FTX, Coinbase, Bitfinex, along with OKX were ones on the list of sites affected by the outage. However, latest reports clarified that most of these websites and pages are back to being up and running for all its users.