Tata Chief N Chandrasekaran Backs Agnipath Scheme: It Will Discipline and Train Youth "Agnipath is not just a great opportunity for the youth to serve the nation's defence forces but it will also make available a very disciplined and trained youth for the industry, including the Tata Group,"

The chief of Tata Group, Mr. N Chandrasekaran has given his thoughts on the Agnipath scheme which seems to have divided the nation ever since its introduction. According to Mr. Chandrasekaran, the Agnipath scheme is a great way to get the massive youth of the nation to serve their country which is a great opportunity which many people will never get. He also said that it will make the youth that come out of the forces more disciplined and having trained people entering the industry will be great for the business of the country which will in turn make the economy of the nation very healthy.

He said that the people of the company can see the potential that the scheme has and the good that it can do for the country and its people. He also said that it is a great opportunity for the people and the government to do great things. 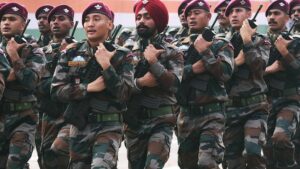 The Agnipath scheme was announced just a week ago and is already making the headlines every day. According to the scheme, the Indian forces can recruit 17 years olds to 21 years olds for a span of 4 years with a clause where a fourth of them can be retained with the forces for the next 15 years.

The government then increased the ceiling of the age from 21 to 22. Protests have since been going on all over the country due to this announcement.  The government introduced the scheme in a bid to bring down the average age of the Indian forces and get more people to enlist themselves with the defence forces of the nation.

The scheme and the government have however come under fire as this type of scheme does not give a security of future or a long term livelihood for most people in the scheme (75% to be exact). They want to work the full 15 years as this will give more financial security to them and it will also enable them to work harder to get promotions. However, this is more like a unguaranteed scheme where the odds are against them.