Coca-Cola acquires its remaining stake in Drink Maker BodyArmor for $5.6 Billion Coca-Cola announced that it will acquire full ownership in BodyArmor

On Monday, Coca-Cola has announced that they bought a full stake and take all control of the sports drink maker BodyArmor for $5.6 billion. This acquisition makes the company’s largest brand acquisition ever.

BodyArmor was founded in 2011. It is a competitor of market giants like Gatorade, which is owned by Pepsico.

Coca-Cola already bought its 15 percent stake in 2018. According to a statement, after the acquisition, it will continue to operate the firm separately from its business in North America. According to The Wall Street Journal, After this 15 percent stake in BodyArmor, Coca-Cola became its second-largest shareholder. At that time, basketball player Kobe Bryant was their third-largest shareholder. From the sale, the late NBA start will receive around $400 million. 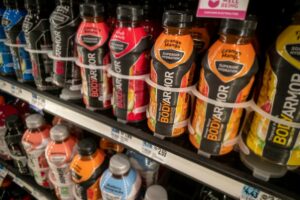 BodyArmor co-founder said in his statement, “Our talented team under the leadership of Brent Hastie, the president, our 400 dedicated employees, and the incredible Coca-Cola bottling partners have helped us to build this remarkable brand.”

The editor of Beverage Digest said,” This purchase of BodyArmor by Coke is a challenge for Gatorade, owned by their rivalry Pepsico. By this Coke is trying to sandwich Gatorade between BodyArmor.”

According to a report of The Wall Journal Street, Gatorade had a market share of 64% in U.S. sports drinks. BodyArmor had an 18% share in this market.

The president of Coca-Cola’s North America operating unit, Alfredo Rivera added that “BodyArmor has been a great system lineup over the last three years. The company has managed to continuous innovation in hydration and in health-and-wellness products.”