Coinbase said that the token will be backed entirely by cash; this is not the case

Coinbase, the largest cryptocurrency exchange in the, says its stablecoin is worth $28 billion. The company’s partner in issuing the coin revealed the coin’s assets for the first time last month. USD Coin features a fixed price and may be redeemed for fiat by users.

A group of assets associated with the stablecoin has been put into a government reserve fund. Experts predict that this will grab the attention of US authorities and enforcers, who have recently focused on stablecoins as a potential economic concern in recent months. 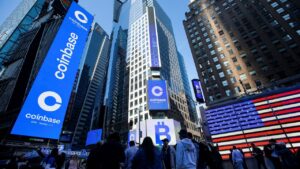 Under its jurisdiction to enforce against “unfair or misleading actions or practices,” the Federal Trade Commission could look into this.

As U.S. investors pour money into the market, stablecoins have come under more scrutiny from the government in recent months. Last week, such coins were worth $117 billion.

USD Coin’s reserves, according to a blog post from earlier this month, meet regulatory criteria. Some of the verbiages on USD Coin’s website detailing its assets changed on the day Bloomberg News contacted the company. The company has yet to reply to requests for comment.

Coin’s website says it is backed by dollars “kept in a bank account” from December 2018 to Monday. A more detailed help page for the currency says its reserves are “100% collateralized by a comparable USD stored in the issuer’s bank accounts”.

The US government has more than a trillion in reserves, according to a report by the Centre for Responsible Investing in Emerging Markets.

Stablecoins are commonly used by cryptocurrency investors to store funds when they want to reduce their exposure to more volatile currencies. Users may also move money between multiple crypto exchanges almost instantly with stablecoins, a task that can take days with a bank. The promise of stablecoins is that investors can exchange $1 off a stablecoin for $1 in real money at any time.

Treasury Secretary Janet Yellen called a meeting of US authorities in July to explore whether the burgeoning stablecoin market posed a threat to financial stability. SEC Chairman Gary Gensler argued that some stablecoins should be regulated as securities and subject to more investor protection.

USD Coin, which launched in September 2018, took advantage of concerns over Tether’s support to enter the rapidly expanding market. USD Coin was supposed to be clear about its holdings and comply with US regulations from the start, according to the companies and the Center.

The reserves backing stablecoins look more almost like those of money-market mutual funds than cash deposits.