Crypto Market has been in bear phenomenon for almost a week now. 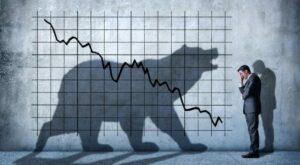 Not a long time ago, the crypto market crashed. Almost $830 billion was disappeared from the market. Since the mayhem, a lot of investors have been pessimistic about the whole market. There is a common feeling among the investors that the market will not be able to revive again and get back to normalcy. With other factors such as tumbling equity markets, geo-political tensions and the pandemic this has to be one of the most unanticipated testing times for the investors all around the globe especially for crypto investors.

Bitcoin and Ether – the top two cryptocurrencies loose their value.

Bitcoin is the most favored and traded cryptocurrency around the world. The range of value for bitcoin has been from $68,990 at its peak to $27,194 at its lowest. Some analysts also predict that it might get reduced to $20,000 some time this year. Ethereum which is only second to bitcoin, also lost its value. The value of Ether fell by around 23%. All the cryptocurrencies around the world are facing the heat due to unexpected implosion of the market.

Coinbase’s CEO Brian Armstrong’s words give a ray of hope.

Coinbase’s CEO Brian Armstrong was also among one of the people, who lost a lot due to the crypto market crash. Even though most of his wealth disappeared, he continues to remain optimistic about the whole phenomenon of cryptocurrency. He acknowledges the fact that a lot of money was lost in the crypto market. But he also believes that this is just the beginner’s stage and as people get more experienced and as the market grows old, the outcome from crypto would be huge. He goes on to state that, Crypto Currencies market will be allocating around 15% of global GDP in the next 20 years. To support his statement, he compares crypto market with the e-commerce. He says, “As e-commerce was introduced in 19990’s and 2000’s and was not popular back then. But as companies started using more of it, it became a popular medium to run business. By the virtue of popularity, e-commerce started contributing around 15% to the GDP.”

In the events of market crash, many investors lost a lot of funds. CEO Brian Armstrong was one among them. Even though he lost his money, he choses to remain optimistic about the market. The approach of being optimistic for surely help the crypto market to come out of bear phase and enter the bull phase. But, the catch here is, with Armstrong, all the other investors have to start being more optimistic about the market.