Crypto Play-To-Earn Games Will Be 90% of Gaming Market in 5 Years, Says Reddit Co-Founder  Alexis Ohanian. In five years you’ll be playing some on-chain similar game that will be just as exciting, but you’ll earn value, and you’ll be the harvester, instead of being harvested for commercials or fleeced for dollars to buy stupid hammers.” 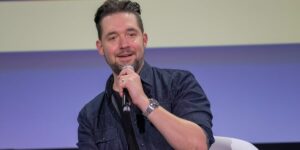 According to Business Insider, in a recent episode of the Where It Happens podcast, Ohanian highlighted the possible benefits of blockchain technology in gaming. asserted in the podcast that “90 percent of people won’t play a game if they aren’t adequately valued.”

Alexis Ohanian, the co-founder of Reddit, is the latest industry figure to voice enthusiasm for the concept of play-to-earn games. The serial entrepreneur, who currently focuses on blockchain and crypto-related initiatives, is bullish on the potential of play to earn, expecting that it would take over the gaming industry in a matter of years.

According to Business Insider, in a recent episode of the Where It Happens podcast, Ohanian highlighted the possible benefits of blockchain technology in gaming.

In the podcast, Ohanian asserted that “90 percent of people will not play a game unless they are adequately valued for that time.” “In five years, instead of being harvested for commercials or fleeced for bucks to buy silly hammers you don’t actually own, you’ll be playing some on-chain similar game that will be just as exciting, but you’ll actually earn value and be the harvester.”

Players can theoretically convert their in-game profits for real-world dollars in most play-to-earn games because they use crypto tokens instead of ordinary in-game currency. Axie Infinity, a Pokemon-like game in which the titular Axies may be bought and sold for RONIN cryptocurrency, is currently the most popular title in the genre.

According to a Business Insider report, Axie’s in-game economy is already experiencing problems, with users cashing out their earnings rather than investing them back into the game. The game also has a $300 minimum buy-in, which is a significant barrier to entry for many players, especially since lower-level players frequently make considerably below minimum wage.

Take-Two CEO Strauss Zelnick, EA CEO Andrew Wilson, and Square Enix CEO Yosuke Matsuda, whose comments on blockchain games created controversy when he projected that players would move away from what he called “play to have fun,” have all indicated interest in the concept of play to earn games.

Also read: ‘Countries that secure some Bitcoin today will be better off than their peers,’ says Fidelity