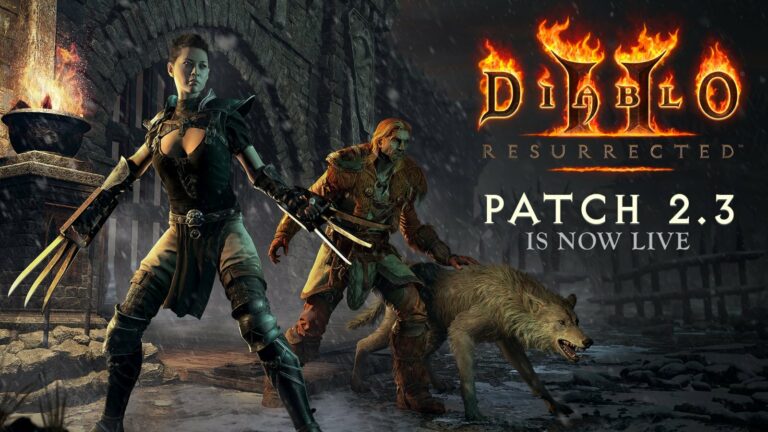 Diablo 2 Resurrected patch 2.3 is out now, and the first patch notes show off offline difficulty scaling as well as other highly requested features coming to the game. The game will soon feature a Public Test Area (PTR) where players can test experimental fixes before launching to live servers, as well as make significant improvements to the user interface (UI) and game systems.

Among other things, it introduces new game parameters, such as changing the game’s difficulty scale. The studio says it is working on an offline difficulty scaling and is preparing awards for eight players, as well as keyboard and mouse quick throws active skill keybindings that reflect controller play, visual tweaks, adjustments as well as the user interface, sound enhancements, attack lacks combat function and Nvidia DLSS functionality.

To use the difficulty feature, players simply need to open the Settings menu, navigate to the Game Settings tab, then Offline, and adjust the Offline Difficulty Scaling slider. Once the setup is fine, new monsters will spawn with a different HP and will reward players with significantly higher experience and loot drop rates when defeated. As with Diablo II Classic, you will need to start a new game session to set the difficulty you want using the slider.

Another option allows us to use all the skills that the character has with hotkeys, without having to select them in the panel. The second option is to activate an additional panel that will appear above the standard interface. However, inspired by player feedback, you will soon be able to use the optional Active Skills panel and assign up to 16 skills there, as well as use them directly through Quick Cast.

If you find yourself looking forward to the next Diablo 2 Resurrected patch, you’ll be delighted to hear that Blizzard has announced that it’s active and comes with a range of fixes needed for the game. According to Blizzard, we expected the patch to be released in early December. The full patch notes for Diablo 2 Resurrected 2.3 have arrived. Luckily, the company released a blog post about the 2.3 Highlights patch a few weeks ago, so we have some details on the accessibility and visual improvements now in-game with Nvidia DLSS.

Unfortunately, you’ll need a compatible Nvidia graphics card to use this feature, but there is no sign of AMD FSR support yet. So there is no need to update if you are not currently using a high-performance computer to try D2 Resurrected. Blizzard also announced support for mods.

Gamers using the controller on a PC or console can now hear audio prompts while browsing potential items in the Options menu. The Nintendo Switch version also includes Switch controls, including gyro targeting, zoom, pan, and touchscreen camera menu selection, while the PC version includes NVIDIA DLSS support and other new advancements. The patch adds offline difficulty scaling, quick launch skills, gameplay, and visual interface improvements, and more. This update will also come with a host of bug fixes and other improvements that will be detailed when the patch is released. As such, Diablo 2 Resurrected was released on PS4, PS5, Xbox Series X / S, Nintendo Switch, Xbox One as well as PC.

Deep Learning Supersampling (DLSS) is an image resampling technology developed by Nvidia for real-time use in certain video games that uses deep learning to resample low-resolution images to higher resolutions for display on higher-resolution computer monitors. Consequently, DLSS will only be available to an exceptional minority of PC gamers, most of whom will have no frame rate issues at all. In action, Nvidia DLSS allows the graphics card to recreate gameplay in high definition, but with fewer performance requirements.

Nvidia’s technology is indeed a boon for those who want to increase the frame rate without refreshing the gaming PC. Due to the AI upgrade, it is easier to provide clear image quality when rendering target low-resolution games. More importantly, Nvidia’s technology promises faster frame rendering speeds, resulting in higher frame rates and a smoother gaming experience. Those who play games with Nvidia cards can also look forward to DLSS, which should improve graphics quality without sacrificing performance. For PC gamers using Nvidia graphics cards compatible with Nvidia DLSS (Deep Learning Super Sampling) technology, these players can now enable DLSS in the graphics settings menu to improve texture quality and scale up the native resolution while not compromising on higher GPU performance.