The advancement in the field of robotics has enabled the engineers to built robots that can perform various tasks such as taking care of the young baby in the house, taking care of your pet, laundry, cleaning your house and much more.

This advancement has reduced the human dependency on other humans. But, the one problem that has always stopped people from using these technologies is the safety of these robots when it comes to human interaction.

The people do not have the idea about how the robot will interact with a child or an elderly person. Disney has patented the concept of soft robots to solve this problem and make the human and robotic interaction safer.

The need for this technology arises from the fact that the use of robots has increased in our daily life. The people are getting more dependent on the robots for doing their work. This means that there is more chance of human-robot interaction than before. 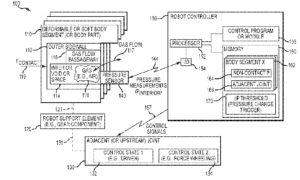 In order to interact with humans, robots require a safe and compliant control of the force-controlled joints. One way to achieve this goal is to equip the robot with torque-controlled joints which would have to be programmed to determine desired motions forces.

However, it has proven difficult to provide complete safe interactions between humans and robots simply by operating these controlled movements.

The robotic systems are becoming cheaper, more reliable, and more capable which has increased their use in our everyday environment. The robots could be found providing interactive guidance or entertainment in many places like the amusement parks, homes, schools, hospitals, or many other places where they help human in their day to day life operations.

In some of these working places, humans and robots work very close to each other which means that they have more chances of interacting daily.

The places where human and robotics interaction is possible, then it often desirable for the robot’s joints and body parts to be compliant and yielding to avoid any kind of injury or damage.

The robots are used in the amusement parks to provide entertainment to the young children. So, these robots should be safe to interact with young children.

Disney realised that there was a need for robots that could safely interact with humans and, in particular, with children.So, to physically interact with children, Disney understood that the robot should be soft and durable. With keeping this fact in mind, the robot physical and control design was created by the engineers of Disney with soft and deformable body parts.

In order to test this design and working Disney developed a small toy-sized robot with soft body parts. The robot was robust to playful, physical interaction with children. The upper body of the robot, including the arms, pelvis, chest, and back, was filled with a special liquid or gas and the body parts or segments were each formed using 3D printing.

Each body part was connected to a pressure sensor to sense the contact. A controller is then operated and the robot senses the contact at one or more of these soft body parts to provide protection to the child during the interaction.

Also Read: 10 Best Robots Of The World That Were Present Since Industrial Revolution !

The outer of each soft body part was relatively soft and used to cover the underlying actuators which were used to drive adjacent joints and also to cover the rigid robot support elements. A soft robot can senses contact, integrates these passive and active approaches to ensure human safety during the physical interaction.

The next challenge for Disney will be to use these robots in the real life situation. They also have to analyse that how these robots interact with the other people. Disney might be using these robots in the parks to give the children a unique experience. Now we will have to wait and see how the thins shape out with this new soft robot technology.