El Salvador purchases another 150 BTC worth $7.3 million. Now it has now purchased a total of 1,370 Bitcoins with this recent acquisition. Nayib Bukele took advantage of the falling Bitcoin price by tweeting about his country’s recent Bitcoin acquisition. 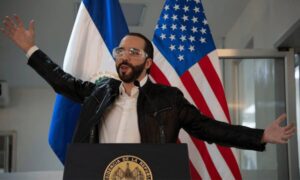 The coins were purchased seven minutes before the cryptocurrency’s price bottomed out, according to Salvadoran President Nayib Bukele.

According to data from Bitcoin.com Markets, the price of numerous cryptocurrencies began falling late Friday night, with Bitcoin falling about 14percent from a little above $52K at 11:42 p.m. EDT to below $45K at 12:28 a.m. The price of BTC is now hovering at $48,040 at the time of writing.

El Salvador’s president, Nayib Bukele, took advantage of the plummeting Bitcoin price by tweeting about his country’s latest BTC purchase at 12:19 a.m. “El Salvador has just purchased the dip!” 150 coins at an average price of $48,670 in US dollars”.

El Salvador has profited from Bitcoin’s price drops on many occasions. Bukele announced on Nov. 26 that his country had purchased 100 more bitcoins (BTC) after the price of the cryptocurrency fell following news of a new Covid-19 variation known as omicron.

In September, El Salvador made Bitcoin, along with the US dollar, legal tender. El Salvador has purchased a total of 1,370 BTC since then. The International Monetary Fund (IMF) issued a warning to the Philippines last week about utilizing Bitcoin as legal cash.

Andrew Bailey, the governor of the Bank of England, has expressed concern about El Salvador’s decision to make Bitcoin its national currency. “I’m particularly concerned about the Bank of England producing money out of thin air,” Bukele told the British central bank’s boss.

The country made headlines earlier this year when it announced that it would vote to accept Bitcoin as legal cash. Despite increased criticism from international institutions such as the International Monetary Fund, El Salvador’s authorities went ahead and approved Bitcoin in early September.

Since then, the country has begun mining BTC using volcanoes, buying more coins during “price dips,” and deciding to use the eventual proceeds from Bitcoin’s rising price to build schools and animal shelters.

President Nayib Bukele went even further during a week-long bitcoin conference in the country, revealing intentions to build an entire city dedicated to cryptocurrency. It will be located in La Union’s eastern part and will be powered by geothermal energy generated by a volcano. As a result, the president vowed that it will produce zero emissions and pay no taxes other than VAT.