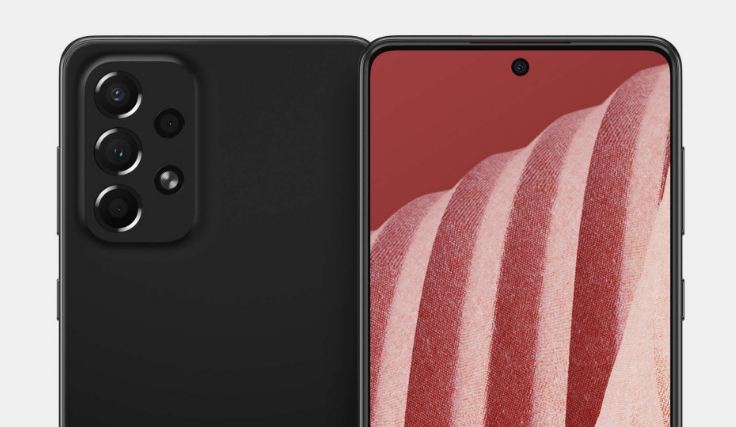 Rumors about the Samsung Galaxy A73 have been circulating for quite some time. The forthcoming smartphone, which will be the successor to the Galaxy A72, is said to include various changes such as 5G compatibility, improved cameras, and a more immersive display. Having said that, the design renderings of the forthcoming Samsung phone appear to be very similar to its predecessor.

The Samsung Galaxy A73 leaked pictures, courtesy of OnLeaks with Zoutons, showing an edge-to-edge display with a conventional centered punch-hole cutout.

The screen is believed to be AMOLED with an in-display fingerprint sensor. The Samsung Galaxy A73 screen will allegedly have a resolution of 1080 x 2400 pixels and a refresh rate of 90Hz.

In addition, the rumored Samsung Galaxy A73 will include a quad-camera array placed in a rectangular module. The camera housing protrudes from the body, much like its predecessor.

The power and volume controls are likewise on the right side, while the speakers and USB-C connector are at the bottom. The phone appears to be missing the 3.5 mm audio jack.

The Snapdragon 750G CPU is expected to power the Samsung Galaxy A73, which will be combined with up to 8GB of RAM and 128GB of default storage. More crucially, the phone is rumored to include a 108MP quad-camera configuration, which is expected to be its main selling point.

In India, the Samsung Galaxy A73 is expected to cost between Rs. 30,000 and Rs. 35,000. With products from Realme, Xiaomi, OnePlus, and Vivo, this pricing bracket is becoming increasingly popular.

Samsung has been progressively improving its Galaxy A series to include 5G capability and to compete with OnePlus, Realme, and others. The next Samsung Galaxy A73 is an excellent option to compete with devices like as the OnePlus Nord 2, Realme GT Master Edition, and others.