El Salvador plans to build a Bitcoin city at the base of a volcano. According to President Nayib Bukele, the city will be spherical in shape, resembling a huge coin, and will be created in La Unión’s south-eastern region. 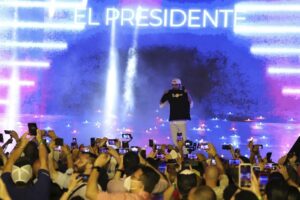 He went on to suggest that the place would mine Bitcoins using geothermal energy from the Conchagua volcano. El Salvador has become the first country to accept Bitcoin as legal tender. Large-scale protests erupted in response to fears that Bitcoin will bring instability and inflation to the impoverished Latin American country.

The city would be built near the Conchagua volcano and construction would begin 60 days after the money was secured. The metropolis, as well as its energy-intensive Bitcoin mining, would be fueled by the volcano’s geothermal energy.

The Conchagua volcano is located on the Gulf of Fonseca in southeastern El Salvador. The Salvadoran government is already running a Bitcoin mining pilot project near the Tecapa volcano at another geothermal power station.

Mr. Bukele told a raucous crowd late Saturday in the coastal village of Mizata during a promotional Bitcoin event that the planned new city will “have everything.” “Everything is committed to Bitcoin,” the 40-year-old stated. “Residential areas, commercial areas, services, museums, entertainment, bars, restaurants, airport, port, rail – everything is devoted to Bitcoin.” The president, who wore a baseball cap backward on stage, stated that there would be no income taxes in the city, only a value-added tax (VAT).

He stated that half of the proceeds would be utilized to “build up the city,” with the remainder going to keep the streets neat and tidy. Bitcoin and other cryptocurrencies are mined by solving complicated mathematical problems with modern computers. It’s expensive, time-consuming, and energy-intensive.

Mr. Bukele gave no timeframe for the city’s construction or completion, although he did suggest that much of the public infrastructure would cost around 300,000 Bitcoins. At the time of writing, one Bitcoin is worth a little under $60,000 (£45,000). In September, El Salvador made the virtual currency legal tender alongside the US dollar.

At the time, the government launched a new digital wallet software, providing each resident $30 (£22) in Bitcoin. In addition, more than 200 new cash machines have been erected throughout the country.

The concept was presented as a means of boosting economic development and job creation, but it has caused division in El Salvador. It means that businesses must now accept digital currency as payment wherever possible. Bitcoin is a problematic currency in part because its value changes a lot; in the previous year, it has gone up and down significantly.

Also read: Tahinis,a family-based restaurant chain that invests all its revenue in Bitcoin