Following the current drop in bitcoin, which has dropped 45 percent since November, Nayib Bukele, El Salvador president posts meme wearing McDonald’s uniform on Saturday. The price of bitcoin continued to fall on Monday, with the price down approximately 3% in the last 24 hours as of midday in New York. 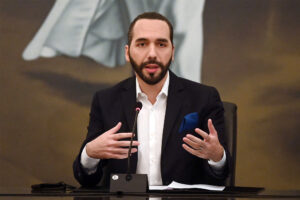 El Salvador’s crypto-enthusiast president appears to be unfazed by bitcoin’s recent precipitous drop: After all, there’s always McDonald’s if leading a country doesn’t work out.

After the recent slump in Bitcoin, which has dropped 45 percent since November, Nayib Bukele, whose country was the first to embrace Bitcoin as legal coinage last year, changed his Twitter profile photo on Saturday to an image of him wearing the uniform of a McDonald’s employee.

Bitcoin’s decline continued on Monday, with the price down about 3 percent in the last 24 hours as of New York’s noontime session. Long-term holders of crypto assets, often known as HODL’ers, or those who “hang on for dear life,” joke about their next occupations if their investments tank in a famous internet meme.

The price of one bitcoin was a little over $34,000 on Monday morning, down more than 45 percent from its all-time high of $67,582 in early November, wiping out more than a trillion dollars in value.

Bukele, who has earned a reputation as an aggressive dip buyer, has not been deterred by the crypto fall. The president revealed on Twitter on Friday that the government had purchased 410 bitcoins for $15 million.

El Salvador purchased $26 million in Bitcoin in September before announcing its adoption in October. The government argues that bitcoin will help 70 percent of its inhabitants who don’t have access to traditional banking institutions become more economically integrated.

Residents were encouraged to use bitcoin to pay their taxes, purchase homes, and buy products and services.

Bukele declared in November that his government will construct a coin-shaped “bitcoin city” at the base of a volcano, where geothermal energy would be used to fuel bitcoin mining.

El Salvador has developed a bitcoin portfolio of over 1,500 digital coins valued at roughly $53 million in US dollars under Bukele’s leadership. The tiny Central American government also intends to issue a $1 billion bitcoin bond with a 10-year maturity.

Analysts, on the other hand, aren’t so sure about Bukele’s bet. El Salvador’s bitcoin acquisition, according to Moody’s, is “very dangerous” given the government’s previous financial troubles.

According to Moody, the country’s growing bitcoin portfolio could jeopardize its capacity to repay creditors.