In place of an outright crypto prohibition, Vladimir Gutenev proposes a gold-backed Russian stablecoin. So Crypto mining and stablecoins might be legalized by the Russian government. The legislator feels that legalizing stablecoins and mining would be extremely beneficial to Russia. Proposals for legalization could overturn the proposed blanket crypto ban.

Crypto mining and stablecoins might be legalized by the Russian government 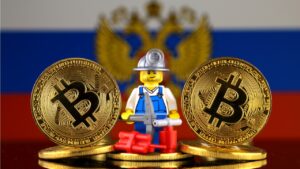 Russia’s senior legislator has proposed that Bitcoin mining and stablecoins be legalized. The government would control and support these stablecoins with gold.

Gutenev’s suggestion is in line with the country’s current crypto ban. The Bank of Russia’s proposed crypto blanket ban is modeled after a similar initiative in China. Both cryptocurrency purchases, trading, and mining are regulated by the Bank. It’s still unclear whether lawmakers will approve this idea.

However, rather than outright outlawing cryptocurrencies, it appears that the government is more interested in finding a mechanism to regulate them. The country’s recent recommendations could indicate that it is preparing for a future in which cryptocurrencies are more widely acknowledged.

According to the article, the government will take action against cryptocurrencies. However, under official oversight, Russia might authorize gold-backed, stable-value cryptocurrencies and crypto mining. The chairman of the State Duma Committee on Industry and Trade, Vladimir Gutenev, believes that legalizing would be beneficial to the country.

According to Gutenev, prohibiting cryptocurrencies is “a good thing for the economy.” He does believe, however, that a government-issued gold-based stablecoin would be beneficial to the country.

Furthermore, private entities/individuals and corporate businesses would be interested in such a financial service. It can also be used to make financial savings.

During the launch, the congressman speculated that the stablecoin would behave similarly to a golden ruble. Russia might use it to dodge economic sanctions and its “limitation” foreign policy, which aims to keep engagement with Western countries to a minimum. The coin can also help other countries develop solid and transparent commercial connections.

The Central Bank of Russia published a comprehensive paper on Thursday clarifying its position on virtual currencies. It also suggested that crypto services be halted.

The government officials accused cryptocurrencies of being very volatile and contributing to unlawful activity in the country, according to a recorded report by Cryptopolitan.

Furthermore, the report proposed that the government levy sanctions on anyone who uses cryptocurrencies to trade commodities or services. The Bank has already attacked the cryptocurrency industry. Mutual funds were previously forbidden from investing in cryptocurrencies by the Bank.