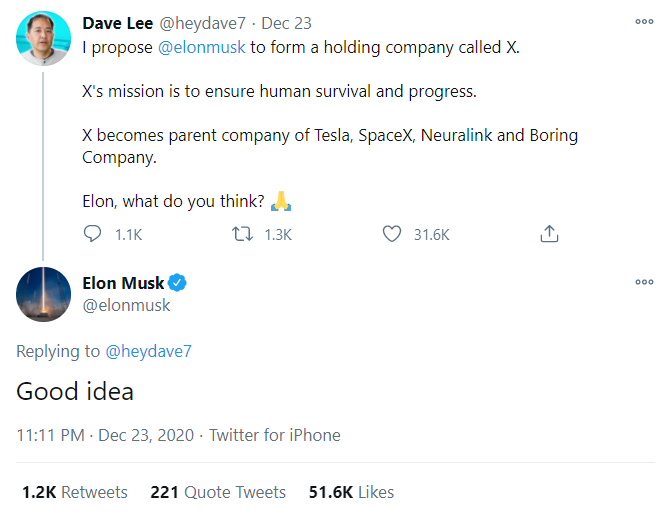 Elon Musk has a lot of companies exploring very different technical aspects. From building Spacecrafts and EVs in SpaceX and Tesla to building chips for the human brain in Neuralink and an underground tunnel from The Boring company, there are a lot of fields that Elon is making his name in. Youtuber Dave Lee suggested an idea of a naming scheme. And recently, Elon put out a tweet saying that he thinks it will be a good idea to put all his companies under one giant megacorporation named ‘X.’ This will also make the corporation the most significant venture ever.

How will the megacorporation named ‘X’ work?

Out of all the companies, only Tesla is public, and the rest are still private companies. According to Dave Lee, if the corporations come together, it will be easier for Elon to start new companies. And also it will be much easier to manage them. Talking about the goal of this corporation, he said its mission will be to “to ensure human survival and progress.”

And since Dave Lee is an investor in Tesla, the goal behind this isn’t to boost the companies’ stock price. But to give Elon time to manage everything much easier. Hence, he will be able to try newer things, focus on innovation, and try to advance the human race.

Fun fact: The idea of this mega holding company isn’t of Dave Lee. Actually, about half a decade back, Elon Musk talked about the idea of having such a company, as Dave mentioned.

Benefits of the new corporation By combining all the four companies, the resources of these companies will also come together. This will reduce the formal procedures of all the companies. And also invite more talents to work for the corporation. And while all this is happening, Musk can explore something new and make big strides as he is already doing with the four companies under his belt.

Elon Musk also owns the domain of X.com. This is because, in 1999, Elon opened an online bank under it, which later merged with another company to become Paypal.

Does the idea of putting Tesla, SpaceX, Neuralink, and The Boring company under one megacorporation seem to be a good idea? Do let us know in the comments below. Also, if you found our content to the point and interesting, do like and share it with your friends.