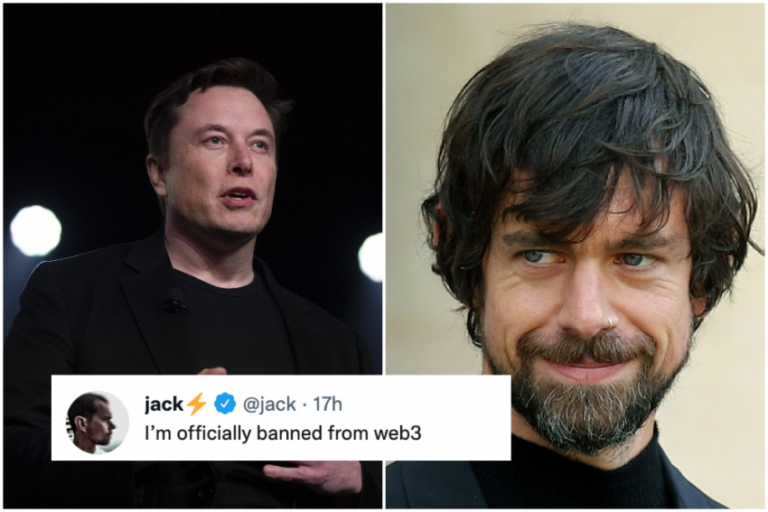 Marc Lowell Andreessen, a fellow internet titan and software entrepreneur, has disabled former Twitter CEO Jack Dorsey’s account on the microblogging platform. Dorsey recently shared a screenshot of the same on social media. The viral tweet is simply another example of Dorsey’s widening divide with other venture capitalists, thought leaders, and tech millionaires.

Dorsey appears to be under fire for his recent remarks about Web3.0, a relatively new phenomena termed the “future of the internet.” Dorsey has previously expressed worries about the lack of decentralisation in “Web3” projects, claiming that moving in this direction would result in the creation of a centralised entity in charge of the internet.

He is not alone in his anti-Web.30 or ‘Web 3’ rant. Elon Musk, the CEO of SpaceX, has also expressed his displeasure with the new development.

Web 3.0, often known as ‘Web3′, is the newest buzzword in the tech, crypto, and venture capital worlds, and is widely regarded as the internet’s future.

Users will be able to access the internet directly without the use of’middlemen’ or third parties such as Google, Twitter, or Facebook in this version of the internet, which is powered by blockchain and crypto technology.

Web3 will allow internet users to access a variety of platforms from a single, individualised account, including social media, email, online shopping, and more. All of these acts, according to an NPR storey, will be part of a public record powered by blockchain to ensure openness.

New search engines, social networks, online businesses and marketplaces, and other services will replace existing ones on the new web. These will be decentralised and blockchain-based. As a result, instead of businesses owning and managing these platforms, they will be used and operated jointly by internet users like you and me.

Its goal is to turn internet users into owners of internet services (which are now provided by private firms). It would essentially decentralise control by cutting out corporate digital giants like Google, Facebook, and Amazon, as well as other privately owned services.

Are Jack Dorsey and Elon Musk against it?

Dorsey has been outspoken in his criticism of the new decentralised internet, claiming that it is all a ruse. He’s also been sceptical of the Web3 venture investors, believing that the planned new internet generation is little more than old wine in a new bottle.

“You don’t own “web3.” The VCs and their LPs do. It will never escape their incentives. It’s ultimately a centralized entity with a different label. Know what you’re getting into…” Dorsey tweeted.

He also uploaded a series of memes about how Web3 would simply serve to feed the avarice of Silicon Valley VCs at the expense of retailers.

Elon Musk, the CEO of Tesla, is also a Web3 sceptic. In recent tweets, he questioned if Web3 is “real.”

“I’m not suggesting that Web3 is real. Seems more like marketing buzzword than reality right now”.

I’m not suggesting web3 is real – seems more marketing buzzword than reality right now – just wondering what the future will be like in 10, 20 or 30 years. 2051 sounds crazy futuristic!

Many people agree with Musk that Web3 is little more than a jargon because it is still in its early stages. Some argue that it isn’t yet fully fleshed out enough to be considered real.

On the other side, supporters have a different viewpoint. Web3 is evident in decentralised financial applications, decentralised autonomous organisations, or DAOs, and the NFT area. Companies like Kickstarter and Discord have sought to start creating in Web3 despite customer backlash.

On the other hand, the concept of a completely decentralised, seamless version of the internet is still a long way off, with many unknowns to go through.

The world’s richest person took to Twitter to write: “Has anyone seen web3? I can’t find it.”

Has anyone seen web3? I can’t find it.

Jack Dorsey responded to Musk’s tweet by saying, “It’s somewhere between a and z,” a dig at Marc Andreessen and Ben Horowitz’s venture capital firm A16z.

Earlier in the day, Dorsey took to Twitter to express his dissatisfaction with Web3 technology and venture capital firms like Andreesen Horowitz, whom he accused of seeking to “own” Web3.

“You don’t own ‘web3’,” Dorsey tweeted. “The VCs and their LPs do. It will never escape their incentives,” he wrote.

Who is Marc Andreessen?

As fantastical as it may appear, Web3 is already generating significant investment. And Andreesen is a major backer of Web3 initiatives and startups. Andreessen Horowitz (a16z), the former CEO of Netscape, is purportedly investing in futuristic metaverse shoe and DeFi initiatives, among other things.

Following Dorsey’s remarks, Andreessen appears to have blocked him on Twitter, advising him to claim that he was “banned” from Web3. Dorsey’s statement might as well be genuine, given that a16z is one of the largest investors in the area.

Andreessen has made billions by betting early on businesses like Facebook, and he has supported a number of startups developing technologies that will one day underpin Web3.

Andreessen Horowitz has a page on its website called “web3 Policy Hub,” with the subhed: “We Deserve a Better Internet.”

“We don’t have all the answers, but we’re eager to work with policymakers, civil society, and other partners to define an affirmative vision for how to use these powerful new tools to benefit society,” the VC says.

Web3 supporters think that today’s online platforms are too centralised and dominated by a small number of powerful internet businesses, such as Amazon, Apple, Alphabet, and Facebook parent company Meta.

When Tesla CEO Elon Musk questioned if any of his 67.4 million Twitter followers had seen Web3, Dorsey implied that it was already under Andreessen Horowitz’s hands.

“It’s somewhere between a and z,” said Dorsey.

Web3’s army of followers wants to see the internet’s power placed in the hands of ordinary people, not venture capitalists. They believe it is too huge and essential to be managed by a small group of firms or investors. The internet is now critical to the global economy, powering everything from nuclear power plants to hospitals.