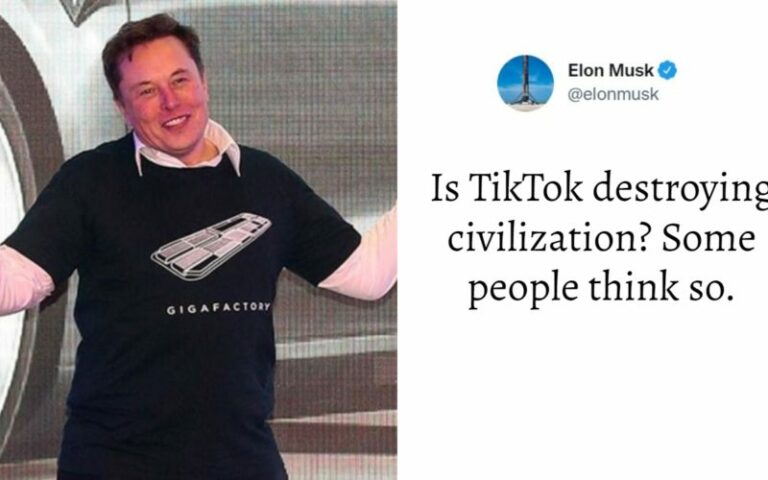 On June 18, 2022 the richest man of the world posted a tweet writing some people think that TikTok is disrupting the way of living.

Following this tweet he said that maybe all the social media platforms together are disrupting the civilization.

Musk is however known for his excessive use of social media and making uncompromisingly forthright comments over the platforms. This recent tweet of the Tesla CEO has left netizens in splits.

One of the Twitter user replied to this saying TikTok is better than Twitter and other social medias and according to her it has many fruitful information. She also aid Musk to not takeover TikTok if he ever plans to. While another one requested Musk to buy Twitter and delete it so that humanity is protected.

A Twitter user sarcastically remarked on this tweet that Dogecoin is the last option to safe the civilization while another one said that TikTok is say more worst than any other social media platform. A user from India wrote on this that this is the reason that India has banned TikTok.http://

Is TikTok destroying civilization? Some people think so.

TikTok is a short-form video hosting service owned by a Chinese company and is one of the most loved application around the globe. It is giving a tough competition to the U.S. based tech giants.

Few days ago some reports said that Musk during his meeting with the employees of Twitter said that he wishes the social media platform to be something like Twitter or WeChat. But his tweet on Saturday says a different story.

In his first address to the entire staff of Twitter the Tesla CEO told them about his aim for the corporation which come into action after takes over the company. His aims includes making the platform like TikTok and WeChat and granting permission for offensive statements. Although, he also mentioned that such comments should not be intensified.

On his plans to turn Twitter into WeChat the Tesla CEO said that no other app in the world is like the WeChat in China and if Twitter is reformed into it it will a great success for the company.

Previously, Musk had also been attacked by the employees of Tesla Inc for making such blunt statements publicly. The employees said that Elon Musk being the CEO and an important representative of the company making such offensive remarks in public indirectly turns into a statement by the company.