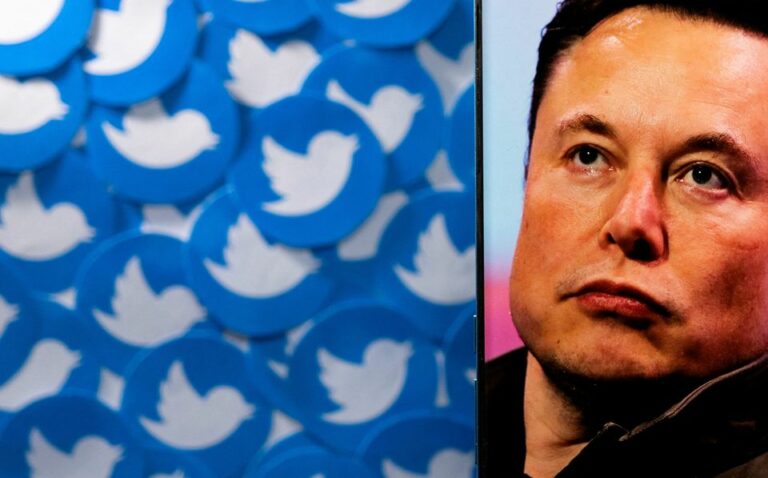 An image of Elon Musk is seen on a smartphone placed on printed Twitter logos in this picture illustration taken April 28, 2022.
Home
News

Elon Musk, chief executive officer of Twitter said on Saturday that the social networking site currently employs nearly 2300 employees at various posts and levels. Elon Musks’ statement on Twitter came as a response to a report published by CNBC.

As a response to this media report, Elon Musk tweeted that information provided by CNBC is wrong and that there are nearly 2300 active working employees on the social networking platform. He also said that several hundred employees at Twitter are working on trust and safety along with a large number of contractors.

Elon Musk who is the second richest person on the planet has been under severe attack for the past few months as he purchased a majority stake in Twitter and made it a private company.

Over the past few months, various news reports were published stating that things were not going smoothly on Twitter. Reports were stating that Elon Musk has decided to stop serving food at the headquarters of Twitter. Some reports talked about how Twitter was not paying rent for headquarters and could soon be evicted.

Elon Musk took to Twitter and made his position clear every time news agencies come up with new information regarding operations at the company.

The multi-billionaire businessman and entrepreneur based in the United States acquired Twitter in October 2022 after months of instability and controversies.

Soon after becoming the owner of Twitter, Elon Musk decided to sack top management of the company including CEO Parag Agrawal. After assuming the position of Chief Executive Officer of Twitter, he decided to make several changes in the workings of the organization, such as monetizing the verification blue tick mark, restructuring the board of directors, and searching for new avenues to monetize the platform.

A few months ago, the company also decided to cut the workforce by nearly 50 percent as part of reducing costs and expenses. The company suffered huge declines in advertisement revenues.