Mayor-elect Eric Adams has pledged to make New York a crypto-friendly city and to explore the launch of the city’s coin, challenging Miami’s mayor to a “friendly competition.” 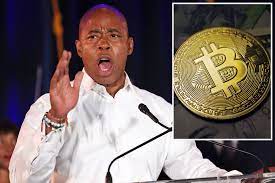 Adams said in an interview with Bloomberg Radio Wednesday, a day after cruising to victory in the city’s mayoral race, “He has a MiamiCoin that is doing extremely well — we’re going to look in the direction to carry it through.”

Adams went on to say that he’ll “look into what’s preventing bitcoin and cryptocurrency growth in our city.” The Democrat also underlined the importance of preparing a local workforce for jobs in the developing crypto business in New York City.

He told Bloomberg, “We can’t have a one-sided city where some groups and sectors thrive.” He went on to say that in the borough of Brooklyn, where he served as mayor, there has been a 356 percent rise in tech firms in the last ten years.

Adams also stated that he has been increasing his meetings with local and international tech firms and entrepreneurs. Adams committed to making New York City more business-friendly in a separate interview on Bloomberg Television later Wednesday.

“Doing business with us is too bureaucratic, too expensive, and too difficult,” Adams added. “Our agencies go into firms searching for ways to penalize or fine them,” says one official. We’re completely transforming the atmosphere. We’re going to construct empires here in the Empire State.”

Adams promised to make New York City “the hub of Bitcoins” in June, only weeks after sparring with Miami Mayor Francis Suarez over how to grow business and residence in the city.

Suarez, 44, is running for re-election and has put much of his political future on his support for bitcoin and his efforts to position the city of Miami as a hub for the quickly rising crypto sector.

Suarez expressed hope in September that MiamiCoin, a new crypto initiative that debuted in August, may help the city while also removing the need for people to pay taxes by allowing them to participate in the coin’s mining and staking.

“When you consider the prospect of running a government without requiring citizens to pay taxes. In September, Suarez told the Washington Post, “That’s great.”

Suarez also recently announced that he will receive his next paycheck solely in bitcoin, however, it’s unclear if this would affect his other earnings from side jobs as a lawyer and a private equity executive. The Washington Post revealed in March that child star-turned-Bitcoin billionaire Brock Pierce gave $2,000 to Adams’ campaign, as well as $2,000 to Adams’ then-rival Carlos Menchaca. Pierce also contributed to several other state legislators.