According to Ethereum Co-Founder Vitalik Buterin, the collapse of FTX collects lessons for all crypto investors and businesses. Buterin emphasized the blockchain which is the so-called crypto technology behind cryptocurrency. He also admitted the huge impact of the bankruptcy of the Crypto trading company FTX.

From the days of bankruptcy of the crypto exchange company FTX, many of the other entities have taken a hit by the fallout from Blockfi to Crypto.com to Gemini.

Buterin said blockchain base layers and decentralized finance protocols worked flawlessly, despite the chaos in the crypto market.

After the fall of ftx, the crypto market has also been going down. Ether Cryptocurrency has gone down by 55%.

“What happened at FTX was of course a huge tragedy,” Buterin told Bloomberg. “That said, many in the Ethereum community also see the situation as a validation of things they believed in all along centralized anything is by default suspect,” he said. These beliefs also included putting one’s trust in “open and transparent code above individual humans,” he added.

Buterin has in recent days weighed in on how crypto exchanges could help shore up confidence in their businesses. The fall of FTX has resulted in an industry-wide self-reckoning over transparency and risk.

Commenting on the earlier collapse of Do Kwon’s TerraUSD algorithmic stablecoin and associated Luna token, Buterin said “crashes like that are on the one hand necessary for the ecosystem.” On the other hand, he added, “I wish that it happened when Terra/Luna was like 10 times smaller.”

It is a decentralized blockchain technology that is open source with the facility to make smart contracts. It is a digital or virtual currency that has made it possible to build a booming digital economy. Because of block chain, it also enabled us to create a metaverse. Ether is the native currency in the crypto platform. It ranks second among the top cryptocurrencies and also second in terms of market capitalization after Bitcoin which has the highest market cap. The conversion rate changes according to the market. It was written in solidity language. It was founded and developed by Vitalik Buterin and Gavin Wood. It has an active host of about 8000 nodes as of September 2022. A node is a network where each node contains data. 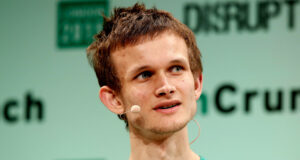 Vitalik Buterin is a Russian-Canadian programmer who is known as one of the co-founders of Ethereum. He also co-founded Crypto magazine in 2011. He was born on 31 January 1994 in Kolomna, Russia. He graduated from the University of Waterloo. He holds around 290,000 ETH in two wallets.