EV Charging Start-up Statiq Receives $25.7M Investment tatiq will use the funds to scale and realise value from the contract portfolio by investing in product engineering and network infrastructure and reinforcing the core team.

Statiq, which is an electric vehicle charging start-up company recently came out to announce that they have received investments amounting to $ 25.7 million USD in its latest round of funding. This was a round A of funding and it was primarily led by Shell Ventures which is a subsidiary of Shell PLC.

When asked what the company plans to do with the newly injected funds, they said that they will scale up their business and take advantage of their contract portfolios quickly. They will do this by researching on their design of the products and its engineering and also build a network foundation and improving the core employees of the firm. 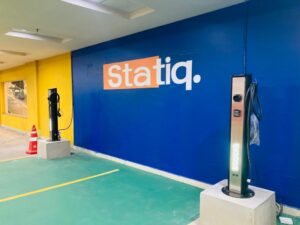 Having a successful round A of funding will enable the company to grow as they expected based on the market value which will allow them to the country’s leading electric vehicle chargers, said the chief executive officer and co-founder of the company, Mr. Akshit Bansal.

Statiq is a company that provides charging services and solutions to users, producers, and sellers of electric vehicles. They also said that they are constructing a charging network and infrastructure for electric vehicles all over the nation. The company was founded 3 years ago back in 2019 and its head office is situated in Gurugram, Haryana.

Mr. Bansal went on to say that both Statiq and Shell are committed to transforming the automobile industry to be more eco friendly and sustainable. Onboarding Shell as a major investor in the company is a major boost to both parties and the industry as a whole.

Statiq also penned a deal with Hero Electric a few weeks ago so that they can provide a holistic ecosystem for electric vehicles. They are also working along side Ather to improve the network of electric vehicle charging stations in many states in North India.

The public statement release by the firm said that closing this round on a high was crucial for the growth and development of the company and the industry.

The chief technical officer and the co-founder of the company, Mr. Raghav Arora said that Statiq can unlock their unbounded potential and reach their goal of safety, excellence, quality, and sustainability much faster. He is excited to be working close with the people of Shell Ventures and expects both companies to grow a lot.

He went to say that with this funding, they can finally scale up their business efficiently and quickly and even improve their tech.