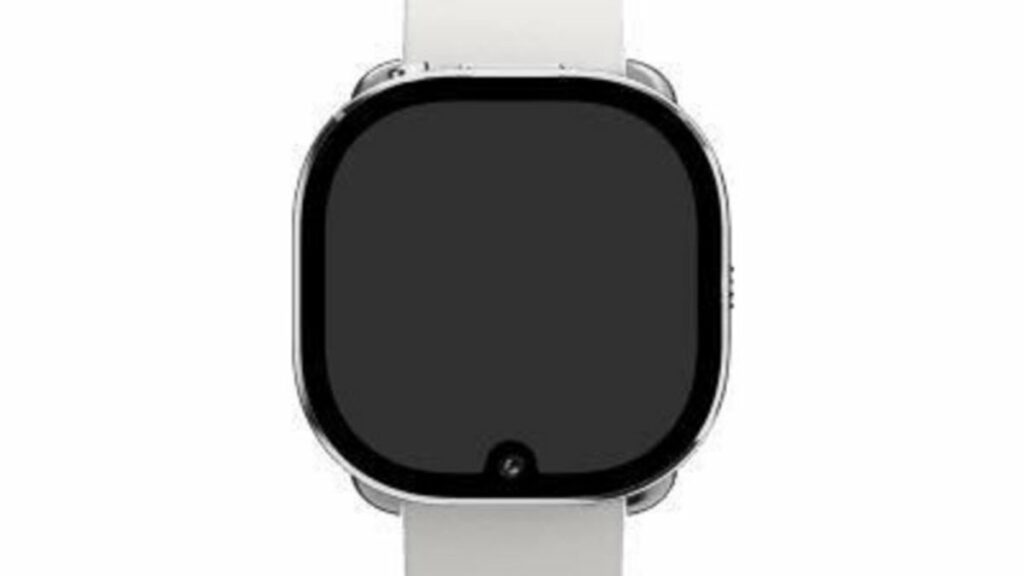 Earlier this year, it was reported that the firm formerly known as Facebook was working on a camera wristwatch with a 2022 release date. A leaked render now provides us a first peek at what this unavoidable horror watch would look like.

Bloomberg obtained the rendering from developer Steve Moser, who in turn obtained it from Bloomberg. Moser claimed to have discovered the image “casually” left in the code of the Facebook View app.

The View app is a companion app for the Ray-Ban Stories smart sunglasses, which were released last month by Facebook, okay now its “Meta” Moser tweeted that the wristwatch is codenamed “Milan,” and as the image shows, it has a little punch-hole notch for a front-facing camera.

With a “squircle” display, the watch is similar to Fitbit’s Sense and Versa smartwatches. (Which also resembles the Apple Watch.) On the other hand, a slew of smartwatches look like that.) It also looks to be constructed of stainless steel and has a huge button at the top and right side of the casing.

Aside from the camera, it’s difficult to determine what makes the Facebook—dammit Meta—smartwatch stand out. We can’t tell what kind of sensors the watch has because we can’t view the rear. According to The Verge, the wristwatch will contain a 1080p auto-focus camera on the rear, a front-facing camera for video chats, and a heart rate sensor.

Here it is: The first photo of Meta/Facebook’s in-the-works smartwatch to rival the Apple Watch. Image discovered by @stevemoser in Facebook’s own app and shared exclusively here: https://t.co/FEc6CE6eGQ

The fact that the image was discovered in the Facebook View app suggests that the watch may also focus on collecting short video snippets to be published to social media. According to the meandering dissertation that Facebook CEO (Is it now Meta CEO? I despise it all.)

Given Mark Zuckerberg’s comments on the metaverse, it’s plausible that this wristwatch is an attempt to “take the metaverse on the move.” However, health elements cannot be ruled out, since Zuckerberg made a point of emphasizing VR fitness.

The popular Oculus fitness game Supernatural, for example, enables connecting the Apple Watch to a Quest headset so you can watch your heart rate during the workout. It’s hardly a great leap to believe that Facebook—Meta, sigh, whatever—would want its own gear to be interoperable in this way as well.

According to Bloomberg, while the watch was originally scheduled to launch in 2022, it is likely that it will appear later. However, it appears that the corporation is taking its new wearables program seriously. According to Bloomberg and the Verge, the business is already working on a second and third version of the wristwatch before the first one is even released.

Many factors will determine whether or not this wristwatch is a success. Not only is it really late to the game, but camera smartwatches have generally underperformed. Samsung initially incorporated cameras in its Galaxy Gear smartwatches years ago, and there’s a reason they’re not on the company’s current smartwatches.

However, Qualcomm is reported to be working on a new Snapdragon Wear processor that will accommodate not one, but two cameras.  In any event, given Facebook’s respect for privacy, and a name change isn’t going to change that overnight, it’ll be a challenging sell.

Even if it wasn’t an issue, it would have to address the battery issue. Most flagship smartwatches can’t survive more than 48 hours, and it’s difficult to conceive how long a camera wristable might endure.

It’s also conceivable that whatever smartwatch is released will look nothing like this depiction. According to Zuckerberg’s remarks during yesterday’s presentation, it might take decades for the metaverse to completely materialise.

Whatever this first wristwatch turns out to be, like the Ray-Ban Stories, it may be more of an attempt to convince the public to accept the concept of carrying about small, unobtrusive cameras.