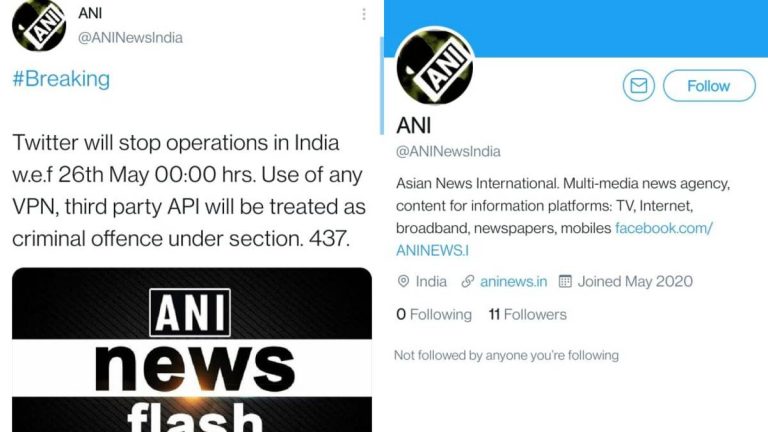 A fake Twitter handle claiming to be Asian News International (ANI), a just recently tweeted that Twitter is going to cease its operations in India starting from May 26. After the Tweet went viral, the fake ANI account was suspended.

The fake tweet was- “Twitter will stop operations in India w.e.f 26th May 00:00 hrs. Use of any VPN, third party API will be treated as a criminal offence under section 437.”

A lot of confusion and chaos was created as this news flash had come from a handle which was using the name of a big news agency- ANI- @ANINewsIndia. Many journalists and activists and users with verified twitter handles like Abhinandan Sekhri and Swati Chaturvedi re-tweeted this with quotes

Abhinandan retweeted the tweet with quoting- “Wah!!! Vishwaguru. ease of doing business.. etc etc etc… step 3 to going the way of Iran under Khomeni or Afghanistan under Taliban.. The usual media monkeys still justifying and applauding? Step 1 & 2 were taken a while ago.”

Both of them deleted their tweets once they found out the tweet came from a fake account and unreliable sources.

Many of such tweets like these were criticized by other twitter handles who researched and checked the facts and the reliability of the sources.

Smita Prakash, an ANI chief said in a tweet- “no limit to the number of fake news tweets she makes. Photo from WhatsApp University is pedalled as news. News websites who claim to oh so credible continue to give her column space.”

Another user with a verified account too tweeted about this-

This is how these people become super-spreaders of fake news. Make an unofficial handle tweet from it and then quote/RT from Bluetick handles. I am sure @Twitter will not call it manipulative media. https://t.co/qz83pl5UgW

Twitter has not made any official notice of terminating the operations in India yet. However, Twitter is yet to comply and accept the new rules and norms set by the Indian Government whose deadline was May 26.