Numerous fake Twitter accounts have emerged during amazon’s recent scuffle with their employees in Bessemer, Alabama. Amazon has been often criticized for its working conditions at the company and this has been the catalyst that lead to a vote for forming a union. 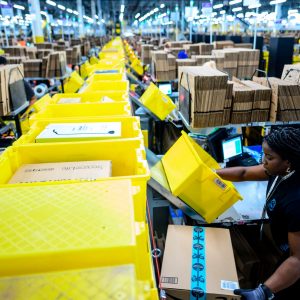 Most of these fake Twitter account handles start with AmazonFC followed by a first name and a designation and almost all of those accounts respond to criticism against Amazon on Twitter. Similar accounts were found to be used in previous years when amazon had faced similar criticisms. These Twitter handles were believed to be used by amazon FC ambassadors, who share positive positive experiences of working in the company but were later found out to be fake. Several of these accounts were permanently suspended due to the violation of Twitter rules but light has not yet been shed on the whole fiasco.

These so-called fake Twitter accounts have raised their voice again against the worker’s decision to form unions. Several of these accounts like @Amazon FCDarla and @AmazonFCLulu were said to post anti-union quotes in support of amazon and were later suspended upon recognizing them as fake. These tweets are rumored to be coordinated by the Amazon management through their FC ambassadors.

FC ambassadors are amazon employees whose job is to tweet nice things about the company as well as to respond to criticism. This program was first brought to the attention of the public when there was a huge surge in positive reviews about amazon in 2018, amid several controversies regarding their harsh working conditions. Amazon informed the public that these accounts were run by the employees who work in fulfillment centers and share facts based on their personal experience. Upon receiving several leaked documents from amazon, it was later found that the employees working in fulfillment centers were required to have good attendance, good humor,  creative writing skills, and were trained to respond to negative tweets about Jeff Bezos, or complaints against the company. This was considered to be a very unethical move by amazon whose attempt to put a veil on their issues, instead, brought them into the spotlight.

Amazon’s public relations sector has also faced major criticism over the years, and their recent tiff with Senators Bernie Sanders, Elizabeth Warren, and Congressman Mark Pocan on Twitter only added fuel to the fire. Other leaked documents also revealed memos from amazon managers who complained about amazon delivery truck drivers urinating in bottles and leaving bags of feces in trucks just days after Amazon’s PR account claimed that these reports were false.

This has strengthened the resolve of the workers making them determined to form a union and the lack of clarity or information from the Amazon management has only aroused more suspicion. The vote to form a union among the workers of the Amazon warehouse in Alabama is expected to bring major changes not only for Amazon but also to several other multi-national companies if the vote turns out to be favorable for the proto-unionists.

Former Goldman Sachs CEO advises everyone to prepare for US Recession