Feeding the Needy with the Help of Machine Learning CMU Delivers 6,000 Meals Monthly

The Covid 19 pandemic has been very hard on people all over the world to deal with. With economies crashing and the job markets going into a downward spiral, normal citizens are finding it hard to regain the rhythm of their daily lives. The most affected strata of population are the underprivileged and the poor ones. Many people who are living cheque to cheque are now in a rock and a hard place, unable to find a way out of it.

Among such times of chaos and uncertainty, researchers at the Carnegie Mellon University have joined hands with the concept of machine learning in order to serve the needy ones of the community. The machine learning system is able to create an optimal and efficient bus route that enables the non profit organisations in the community to deliver meals to the senior citizens. This also allows them to help out the students and families which are dependent on the schools for free meals.

The programme began in the month of July and so far has been able to successfully deliver over 6000 meals each month to the needy. The tools developed by the Carnegie Mellon University are able to identify different distribution centers which are ideal to reach as many people as possible, three times a week. The program also includes provision to provide dinner which can be sufficient to feed a family of four.

This service was delivered by a team of 22 employees from the Parkhurst Dining and Eat’n Park. They deliver the food on every Monday, Wednesday and Friday. Over 400 packets of food containing hundreds of sandwiches, sorted snacks, fruits and vegetables are packed and driven to a place known as Penn Hills. This can be considered as a very noble deed, especially during such testing times as many people are suffering from unemployment or are stuck in an unfamiliar place. 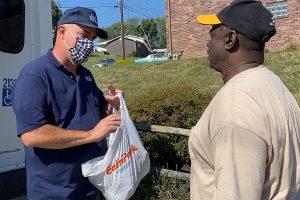 Researchers at Carnegie Mellon University have set up a data sharing partnership between the Penn Hills School District and the Allegheny County Department of Human Services. This was done in order to serve those students who used to rely on free breakfast and lunch at school. Along with all the data gathered, the researchers at the Carnegie Mellon University loaded the address information into the computer and identified the locations and the routes.

According to Stephen Smith, who developed the delivery algorithms and is currently serving as the research professor in the Robotics Institute, “The existing bus routes used to transport students weren’t ideal for meal distribution for a number of reasons. Stopping every few blocks isn’t very efficient, and we needed areas where shuttles could safely stop, park and hand out food to groups of people. Our goal was to identify stops and routes to reach as many people as possible.”

Every day once the service is completed, the total data is collected and reported about how many meals were being passed out at each location. This data helps the organizers to readjust the plans as needed and to also update the algorithm to improve the process. The Carnegie Mellon University has received funding from the National Science Foundation to support its work and to help them to expand into other municipalities. This would also be helpful to make further research on similar problems and to also influence remote food delivery problems worldwide.