So far we have come across numerous ways in which Virtual Reality (VR) is being used to provide a digitally immersive experience for the users. This technology is mainly used in the gaming sector and for entertainment purposes. Having said that, nowadays, more and more research is being conducted on Virtual Reality (VR) and it has been employed in various sectors. Now, a combined team of researchers from Carnegie Mellon University and Benaroya Research Institute at Virginia Mason are now developing a system for better prevention and treatment of diseases with the help of Virtual Reality (VR) and microscopy.

This team of researchers is now developing a method which is a combination of nanoscale imaging techniques and Virtual Reality (VR) technology. This method will allow the researchers to “step inside” their biological data. This combination will allow the scientists to study the cell structures in a much better way. They will be able to enlarge, explore and also analyse the cell structures better than that of a traditional light microscopy.

According to Caroline Stefani is a senior postdoctoral research associate at the Benaroya Research Institute, “At BRI, we’ll prepare the live infectious and autoimmune disease samples. We’ll send those to Carnegie Mellon, where they will enlarge the samples and send images back to BRI to be viewed in VR.”

The Virtual Reality (VR) technology that was used in this process was designed specifically for this purpose. It is called ExMicroVR. Tom Skillman was the person who developed this technology. Skillman is BRI’s former director of research technology. Since then Skillman has found his own company in VR technology called the ‘Immersive Science’.

While speaking about the project Skillman said that, “My role in this grant is to develop a software tool that will allow scientists studying disease a way to understand large amounts of data through a computational technique called ‘immersive science.”

He further added that, “Bringing all that data into VR not only allows the scientist to see their 2D microscope images in full 3D, but to interact with the data, selecting channels, adjusting the views, colors and contrast, and grabbing and rotating the images to quickly identify key aspects of the image that are coupled back to the disease under study.” 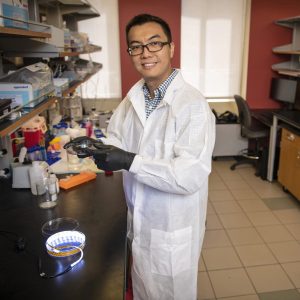 The expansion microscopy technology was developed by Yongxin (Leon) Zhao. Zhao is an assistant professor of biological science at Carnegie Mellon’s, Mellon College of Science. This technology allows the researchers to be able to see finer details in the biological samples with the help of a standard microscope.

This technology works by transforming the biopsy samples chemically into water soluble hydrogels. Zhao then loosens the tissues which allow them to expand more than 100 times their original size. The best is that, this system allows the users to label the molecules and the tissues in the sample. It can also compile this information into a complex set of data. This data is then used to study interactions among cells and their structures.

This research process was funded with a sum amount of $200,000 by the Bill and Melinda Gates Foundation through an initiative called ‘Grand Challenges’. This research can prove to very vital for the researchers in the developing countries as it is very affordable and easily accessible.