First ETF combining Bitcoin and Ethereum gets launches in Canada

Investors looking to purchase a cryptocurrency ETF no longer have to pick between bitcoin (BTC), ethereum (ETH), and its tokens are known as ether, as a new fund that owns both Bitcoin and Ethereum began trading today. The first ETF combining Bitcoin and Ethereum ETFs gets launched 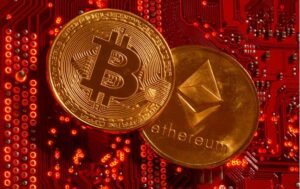 Bitcoin and Ethereum ETFs gets launched in Canada

The new ETF from Evolve ETFs is Canada’s first multicurrency ETF and trades on the TSX under the symbol ETC. It will hold the world’s two major cryptocurrencies, bitcoin, and ethereum, in proportion to their market valuation, which is roughly 67 percent bitcoin and 33 percent ethereum. Evolve will do so for the time being by holding its bitcoin ETF (EBIT) and Ether ETF (ETHR), which will be rebalanced monthly.

Around 65 percent of the cryptocurrency market is made up of bitcoin and ethereum. In a statement, Raj Lala, president and CEO of Evolve ETFs, stated, “Bitcoin has established itself as a store of wealth and is often referred to as digital gold.”

With the Evolve Cryptocurrencies ETF, advisors can invest in both Bitcoin and Ether. The fund, which has around $200 million in assets as of writing, uses an ETF structure to give investors exposure to the daily price movements of various cryptos against the US dollar.

“Ether, often known as digital oil, has become a critical component of digital finance, including NFTs and other DeFi applications.”

Combining the two can also help diversify your portfolio. The performance of bitcoin and ether has differed, although they often move in the same directions. According to Evolve, ether will outperform bitcoin by almost 150 percent in 2020. However, ether lost money in 2019, whereas bitcoin increased by 90 percent.

ETC is tax-free and suitable for TFSA and RRSP contributions, while the underlying funds charge 0.75 percent yearly plus relevant taxes. The price of bitcoin and ether in US dollars will be used to determine price changes. Evolve has stated that it does not expect ETC to pay regular payments.

When it comes to bitcoin ETFs, Canada has been ahead of the game compared to the United States. Purpose Investments (BTCC.B. and BTCC.U) and Evolve ETFs were the first to launch Bitcoin ETFs in February.

In the United States, the Securities and Exchange Commission (SEC) has yet to approve any cryptocurrency ETF.

In its most recent study, which took place from August 26 to September 10, Evolve got 208 replies from 4000 advisors. 40 percent of those surveyed indicated they invest in bitcoin exchange-traded funds (ETFs), with 31 percent citing customer interest as the primary motivator.