Researchers at the University of Glasgow have now come up with a flexible solar skin. This skin is capable of interacting with objects without making use of expensive touch sensors. This synthetic skin will help to create more affordable prosthetic limbs. Along with that it will also allow robots to mimic the sense of touch.

This skin functions by putting an array of miniaturised solar cells that are integrated on its soft polymer surface. The hand’s movements are controlled by micro actuators. These micro actuators are powered by cells which generate enough amount of energy to keep it working.

It also allows the hand to have its unique sense of touch. This sense is provided by measuring the variations in the solar cells’ output. The details about this study are published in the journal, IEEE Transactions on Robotics.

In order to detect the shape of the object touching it, this skin follows certain steps. When a particular object gets closer to the cell, it reduces the amount of light that is reaching towards the skin. The power generation amount by cells keeps dropping as the object gets closer and the light gets lesser and lesser. Eventually, the power goes to zero when an object comes in contact with it and covers the surface. The skin then interprets the levels of power that are produced by each cell and is able to detect the shape of the object that has come in contact with its surface.

Professor Dahiya from the James Watt School of Engineering said that, “Touch-sensitive electronic skin has found numerous experimental applications in prosthetics and robotics in recent years, but our project is the first energy-generating e-skin capable of offering touch feedback without using dedicated touch sensors.”

They also added that, “That lack of sensors means the skin requires no conventional power source to work, unlike other equivalent devices which include touch sensors. In fact, the skin itself is the source of energy, capable of powering the hand and devices attached to it. The generated power can be stored in devices such as flexible supercapacitors we’ve developed to work alongside the skin, so it doesn’t have to be constantly exposed to the sun in order to work.” 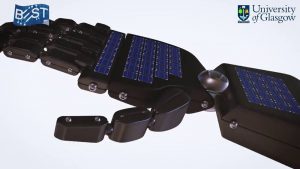 In order to calculate and sense the amount of distance between an object and the hand, the skin is incorporated with a set of simple LED’s. These LED’s are placed between the solar cells in the skin. They are responsible for transmission of infra red light towards the object. The skin then proceeds to measure the amount of time light takes to reflect from the object and thus calculates the distance between an object and the surface of the skin.

Through the collection and combination of information gathered from the solar cell and the LED’s, the skin is able to deduce an object’s proximity, location and edges. It is also capable of replicating many of the parameters that were measured by more traditional touch sensors. With the help of all this data, the hand is able to get a grasp on objects that are placed in front of it.

Professor Dahiya said, “We’ve also experimented with adding the hand to the end of a robot arm, similar to the ones found in places like car manufacturing facilities. The skin’s sensors are capable of stopping the arm’s motion when it senses an unexpected object, which we believe could help prevent future industrial accidents.”