Frances Haugen aims to train lawyers to fight Facebook The Facebook whistleblower is attempting to get a non-profit off the ground. 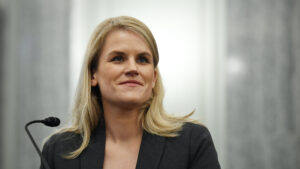 Recent reports suggest that Facebook whistleblower Frances Haugen is currently aiming to start a non-profit which would be focused on holding companies such as Meta responsible. Not long ago, she released a range of internal paperwork and information from Facebook, testifying in front lawmakers regarding Facebook’s behaviour.

Reportedly, Haugen plans to call the organisation ‘Beyond the Screen,’ and focus it on three essential goals. Firstly, educating attorneys who could possibly face social media companies. Secondly, incentivising investors to determine how socially responsible a company is prior to giving money to it. Finally, providing regulators and researchers with an insight into how social media platforms work.

According to reports, the whistleblower is presently working two more individuals on the project, aiming to raise about $5 million in funding for its launch. Additionally, the reports stated that Haugen has already got hold of at least some funding from certain backers currently unknown.

She hopes that the non-profit would provide lawyers with an advantage when handling a class-action lawsuit against platforms. Additionally, she aims to come up with a metric that investors can utilise to compare how successful companies are at keeping users secure.

What else does Haugen hope to do with the organisation?

With time, the Facebook whistleblower aims to develop a mock social network which can be used for the demonstration and test of the workings of platforms and their algorithms. Mainly, this would help people better understand the workings of companies without their involvement. This could aid researchers who had previously struggled with platforms like Facebook feeding them inaccurate information.

Evidently, this seems like a more focused version of the concept Haugen spoke of in 2021, explaining what she aimed to develop. She defined that as an ‘open source social network’ for the use of students of any age where they can ‘learn and experiment.’

Further, Haugen stated that her target was to reach a juncture where such an organisation would be rather unnecessary. As she specified, Meta’s Facebook forms the entire internet in certain countries. Though she has currently pushed for legislation only in the US and EU, Haugen wants the organisation to focus on the entire world. In all probability, this would indicate trying to push for reform in places where a significant amount of groundwork is still pending. Clearly, this could emerge as a crucial step for the development of the entire humankind.