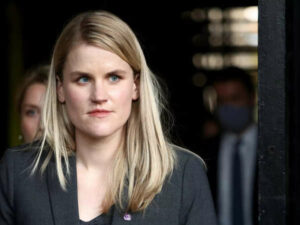 Recently, Facebook whistleblower Frances Haugen stated how Meta would not be able recover until Mark Zuckerberg steps down as its CEO. She talked about what forced her to go public following her leaving the social media giant in May last year, in a recent interview.

Haugen reportedly took tens of thousands of pages of concerned documents indicating the company being aware of its products being harmful to the mental health of teenagers. Along with it, how the product instigated ethnic violence in nations like Ethiopia, and how they were unable to control misinformation prior to the Washington DC riots on January 6, 2021.

Moreover, she went on to remark how the chief executive honestly believed that Facebook ‘is just a mirror of reality’ and how one is unhappy as they could ‘see it now.’ She went on to say how Zuckerberg has had people around him since age of 19 assuring him that ‘he was doing great job.’

Additionally, she stated how he could be ‘demonised,’ but that would not ‘make him heal faster.’ Zuckerberg holds 56% of Meta’s voting rights which, she stated, was unlike most of the public companies. This indicates how none but only Zuckerberg ‘can control’ the social media giant currently.

“I don’t think the company can recover as long as he is the leader of it.”

Subsequently, Haugen mentioned a change Facebook brought to its algorithm in the year 2018. This was to generate reactions from users, rather than just aiming to grow dwell time on the platform. She stated how it is not good ‘unless we provoke a reaction from you.’

Moreover, she noted that extreme forms of the content gets most extensive distribution from the places that are ‘linguistically diverse.’ According to Haugen, this indicated that they were making use of the most ‘dangerous version’ of the platform, keeping space for hate speech on it. Last month itself, a former moderator of Facebook in Kenya accused the company of human trafficking.

The Facebook moderator, Daniel Motaung stated that he attempted to initiate a workers’ union owing to the traumatic content that the moderators had to view. However, he was fired as result of his actions.

In the interview, Haugen went on to note how Zuckerberg doubling down on the metaverse when she brought up the problems on genocide, instead of attempting to make the ‘system safe’, indicated ‘dereliction of duty.’