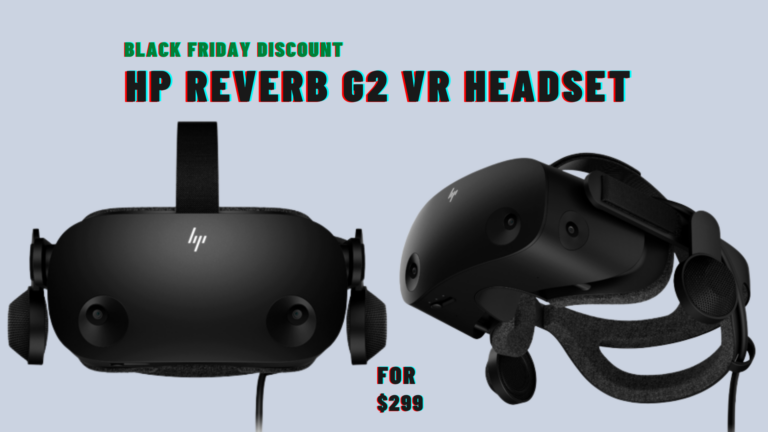 Wouldn’t it be fantastic if you could experience true Virtual Reality on a budget? Well, we live in a Virtual Reality era, and several technological titans such as Apple and Google have been working hard to bring the finest of the best VR headsets to market. Already, we have Meta’s Quest VR headset, which has been selling at a significant discount.

However, in recent years, virtual reality has emerged as a hotly debated technology, with an increasing number of people gravitating toward it.

However, if you want to try out VR headsets on a budget, you may get your hands on this new VR headset from HP dubbed the Reverb G2 Virtual Reality headset.

This HP Reverb G1 Virtual Reality Headset is one of the entry-level headsets that can immerse you in the VR world and perform a variety of activities linked to it.

Without further ado, let’s have a look at what HP has to offer with this headset during their Black Friday Sale.

Before we move on to the cost, let’s look at the features of this new VR gear. To begin with, the design of this VR headset is stylish, and HP has not skimped on the materials used in its construction.

This Reverb G2 VR headset does not require any extra sensors to function; instead, it can function using the four inbuilt cameras.

Let’s go into the acoustic and visual aspects of the VR headset now. The LCD panels on this Reverb G2 headset deliver a high-resolution output of 2160×2160 per eye. Furthermore, this VR headset has an overall field of view of up to 114 degrees.

In terms of compatibility, this VR headset has been designed with the industry in mind, since it supports numerous popular VR platforms such as SteamVR and Windows Mixed Reality.

If you are considering purchasing this headset! Then, we’ve included some price information here. The headgear is currently available at a significant discount as part of HP’s official Black Friday Sale for this season.

This headset was just introduced, and it was priced at a premium of $599. However, you no longer have to pay such a high price because this headset has received a $300 discount, bringing the price down to $299.

You can buy this new headset by accessing the HP e-commerce website through this link.