Ghostbusters: Afterlife trailer comes out as a happy surprise after several delays. 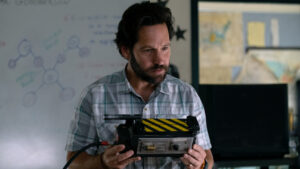 Twitterati has found yet another axis point to release their celebration energy at. Ghostbusters: Afterlife has come out as a pleasant surprise for fans who were eagerly waiting to get a glimpse of the movie. Although the film was supposed to be released last year, the pandemic pushed the release date further. However, it seems like the wait has added to the excitement which is well-reflected on Twitter. Not so surprisingly, it has entered the trending list on Twitter. Here is a peep into the much-anticipated trailer.

The film is all set to release on the 11th of November. From what we have seen, it seems like the movie holds some promise. As the wise ones say, the result of a long wait is often sweet. Let’s hope it is true in this case.

From the responses on Twitter, it is evident that Ghostbusters: Afterlife has added some life to those souls who were waiting for it. The upcoming movie is a sequel to Ghostbusters(1984) and Ghostbusters II (1989). For the uninformed, the plot of the movie revolves around a mother and her two kids who discover upon moving to Oklahoma, an intriguing past of their grandfather. It does not need special mention that, blasts from the past always tend to be interesting as the curiosity element is intact. We will have to wait and see if the newest movie will hold up the legacy. The previous two movies were directed by Ivan Reitman. This is another point of intrigue as the upcoming film is directed by his son, Jason Reitman. Now, that is more than one legacy to uphold. If you aren’t familiar with Jason Reitman, taking a look at his movies might help. Tully, Front Runner, and Juno to name a few.

The cast includes Carrie Coon, Mckenna Grace, Finn Wolfhard. In addition to them, the movie also includes Paul Rudd, Logan Kim, Celeste O’Connor, and Tracy Letts. With the new film, Bill Murray, Dan Aykroyd, Ernie Hudson, Sigourney Weaver, and Annie Potts will make a return to the franchise. Here are a few reactions on Twitter in response to the trailer.

He came out here for a reason. Watch the new trailer for #Ghostbusters: Afterlife, exclusively in movie theaters this November. pic.twitter.com/MGwhEbyqAW

Let’s look forward to a stunning performance as well.

Well, it is supposed to be horror. Some mass hysteria won’t do any harm.

Since everyone's talking about Ghostbusters, a reminder that Slimer Toothpaste and Slimer Bubble Gum were available at the same time in very similar packages, which assuredly led to mass hysteria. I mean, the toothpaste was even meant to *taste* like bubble gum. 🤯 pic.twitter.com/ImRKmFF49p

the whole problem with the premise of the new ghostbusters is that if people proved that ghosts are real, you would remember that. everyone would know who those guys are.

I feel like instead of tweeting "actually Ghostbusters always sucked" you could just like…go outside lol idk why do we have to be like this? let people enjoy things or if you can't contribute anything just…move on? pic.twitter.com/ZIHRdOEOvi

Well, that’s a debatable topic. But, seeing Hemsworth’s goofy face, one is tempted to rethink.

The #Ghostbusters franchise peaked here and anything that comes after is therefore meaningless pic.twitter.com/4DDAspFsrh

Something is definitely coming. After the pandemic, that actually sounds a bit scary. Or does it?

Opinions vary. Opinions are supposed to vary after all.

I will never understand why some people treat Ghostbusters like a religion. It’s so slight, so slapped-together. That’s the source of any charm that it has.