How cool it will be to have an AI write codes for you? GitHub, Inc. owned by Microsoft has released an AI-powered code writer named GitHub Copilot to the public.

GitHub Copilot helps you get better focus and build faster by instantly suggesting code—and is now available for developers everywhere.https://t.co/R6ZqAEtLJF

As per reports, Copilot will cost 10 dollars per month or $100 for a year.

AI can be used by verified students and maintainers (“verified” open source contributors) for free. These students and verified developers will be selected from the GitHub Education programme.

Other developers and users will have to make payments as per their needs. 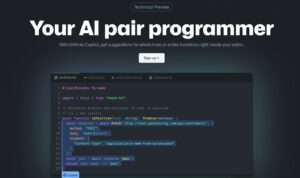 Users who had access to the software during the technical trials cannot use the software anymore until and unless they activate a 60-day free trial. After 60 day trial period, they should pay either $10 or $100 to continue using the AI.

CEO of GitHub, Thomas Dohmke wrote in a blog post that AI can now be harnessed by developers to write and complete code. He also said that AI-assisted coding will fundamentally change the nature of software development. According to him, using this new AI, developers can write code easier and faster and be happy with their lives.

In the blog post, he also mentioned that companies will get their Copilot AI (enterprise mode) by end of this year’

According to a report by The Register, GitHub Copilot comes in the form of an extension for text editors. Copilot is powered by Open AIs text generating technology, which can be plugged into applications. Copilot can be used in Microsoft Visual Studio, visual; studio code, Neovim etc.

After completing the installation, the coding tool can autocomplete lines of code. It can respond to inline comments about a planned function by suggesting the code to implement the function.

GitHub also released a new feature along with the release of Copilot. The feature named Copilot can translate codes into descriptions in natural language. It can help novice developers work using the tool.

Austen Allred, Co-founder & CEO of Bloom Institute of Technology, tweeted that Copilot by GitHub is going to be a successful tool. He also mentioned how Microsoft with help of GitHub is becoming one of the most developer-friendly companies to ever exist.

GitHub Copilot: $10/month to give your engineers an AI bot that writes code for them?

That thing is going to absolutely print money.

I don't think we fully understand how incredible it is that Microsoft turned around (on the backs of Github, VS Code) to become one of the most developer-friendly companies that exist.

What a jaw-dropping turnaround for those who remember old Microsoft.

As a response to developers who complain about the cost of Copilot, Austin tweeted that if an AI coding tool saves 5 minutes, then spending $10 is worth the result.

Related: Seeing some developers complain about how Copilot is charging "so much" though they only trust it to write boilerplate code, keep code clean, and write comments.

If Copilot saves you 5 mins it's probably worth it.