Google Photos, a photo-sharing and storage service developed by Google, is planning to limit free storage on Google Photos to 15GB after 1 June. For any extra storage, users will have to pay a monthly subscription of Google One.

Any “high quality” photo or video a user uploads to the service will be counted towards a 15GB limit. The limit will be shared via Gmail, as well as through as well as Workspace documents, spreadsheets, and slides, so users will have to be efficient when it comes to backing up any pictures.

Any high-quality file uploaded prior to the 1 June deadline will not be counted towards the limit yet. This will give users some time to make sure that all their important media files are uploaded to the cloud. 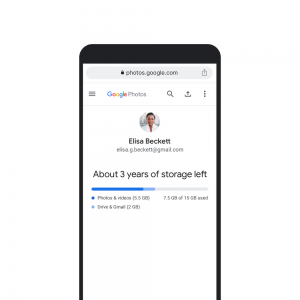 As of now, the Google Photos service offers unlimited backup for high-quality photos and videos, which are only slightly reduced in quality from the original media file. Only limited files that are uploaded in their original format have a limit on their storage. However, after 1 June, users will have to pay for a Google One storage plan if their total photo uploads and Workspace files are more than 15GB. The cloud service will cost them $2 a month for 100GB of space, and there is also a 200GB and a 2TB tier that will cost them $3 and $10 a month, respectively.

There are a few catches. The unlimited storage still only applies to high-quality media, which consists of compressed 16-megapixel stills. Anything uploaded with the “original quality” will be included in the storage cap.

However, the situation is different for Pixel users, which it has been for quite some time. Currently, Pixel owners get unlimited original quality pictures under the company’s policy. But they will also be downgraded to unlimited high-quality pictures and videos on 1 June. They should, along with users of Google Photos, take the remainder of May to upload any pictures that they have not put on Google Photos before the lower quality limit is implemented. Unfortunately, Google has already confirmed in a statement that future Pixel phones who begin using the device after 1 June will not get the same perks.

Google Photos itself works by storing unlimited photos and videos up to 16 megapixels and 1080p resolution, respectively. Google Photos acts as a backup when photos are sent, or in Google-related lingo,  ‘Shared’. This is nothing more than a commonly used backup tool when photos are shared between social media or other apps or platforms.