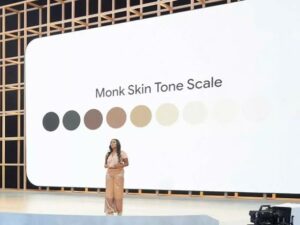 On Wednesday, May 11. Google introduced a new palette of 10 skin tones. It described the unveiling as a move towards making gadgets and apps that serve people of colour more appropriately.

The search giant pointed out how its Monk Skin Tone Scale is made to replace the Fitzpatrick Skin Type. This is a flawed range of six colours which emerged popular in the tech world. The popularity was for the assessment of whether heart-rate sensors of smartwatches, AI systems such as facial recognition and other features indicated bias based on colour.

Research in the field of tech recognised the underrepresentation of coloured people by Fitzpatrick. Reports from 2021 had hinted on Alphabet Inc’s Google working on a suitable alternative to this flawed system.

The search giant collaborated with Ellis Monk, a sociologist at Harvard University for the replacement. Monk studies colourism, and expressed feeling dehumanised by the camera that was unable to detect his face and reflect his own complexion. He had mentioned how Fitzpatrick only works for the efficient classification of differentiating among lighter skin tones. However, he said, most of the people are darker, hence he wanted a scale that works better for the ‘majority of the world.’

By the means of Photoshop and other digital art methods, Monk curated ten skin tones. Clearly, the figure is manageable enough for people who assess and contribute to training of Artificial Intelligence systems. Google Inc, along with the sociologist, surveyed about 3,000 individuals across the country. Around the US, they discovered that a fair number of them found a 10 point scale to match their skin just as much as a 40 shade palette.

Is the Monk Skin Tone Scale a suitable replacement?

The head of product for Google’s responsible AI team, Tulsee Doshi commented on the company’s new addition. She referred to the Monk skin tone scale as ‘a good balance between being representative and being tractable.’ In fact, the search giant is already visibly putting it to use.

Google Images searches related to beauty like ‘bridal makeup looks’ are now enabling filtering results through the scale. Searches for images like ‘infants’ are now displaying images with different skin complexions. Moreover, Google Photos is deploying the Monk scale in order to satisfy a range of users with the filter options. They want to prove that Google’s face-matching software is not biased in any way.

However, Doshi mentioned that issues could still interfere their products in case softwares do not have adequate data on every skin tone. It could also occur if the tools or people used to determine others’ skin are partial by lighting distinctions or personal perceptions.