Gordon Signs Bill Exempting Wyoming Natural Gas Flared For Cryptocurrency Mining From Taxation House Bill 189 exempts the use of natural gas flares for activities such as bitcoin mining from taxation.

On Thursday, April 15, Wyoming Governor Mark Gordon signed House Bill 189 into law, which exempts the use of natural gas flares for activities such as bitcoin mining from taxation.

Mining cryptocurrency is a very energy-intensive operation. To validate bitcoin transactions, miners use a collection of extremely powerful computers to solve random “problems.” Miners have compensated cryptocurrency after sending their verifications to the network pool. 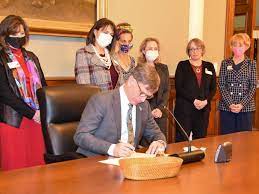 In 2020, three Casper entrepreneurs founded “Highwire Energy Partners,” a company that mines bitcoin using Wyoming’s excess of natural gas. The idea behind Highwire is to connect directly into flared natural gas or wells that are about to be shut down. Highwire does this by transporting 1414-square-foot bespoke huts right to the well and powering them with a field generator powered by the well’s natural gas.

House Bill 189, according to Gordon’s office, “allows oil companies to use natural gas that would otherwise be vented into the environment for other profitable applications, such as cryptocurrency mining.”

The Wyoming House of Representatives initially passed the bill on a third reading vote of 31-28 on March 24:

The Senate then passed the bill on a third reading vote of 26-2 on April 2:

Because the Senate adopted an amendment to the legislation, the bill returned to the House for a concurrence vote which passed 36-20 on April 6: