The Minister of State for Electronic and IT, Rajeev Chandrasekhar, addressed the Lok Sabha on the 30th of March. He announced that the government has no intention to force social media users to verify themselves as it invades their right to privacy.

He went to say that in a world where everyone has a digital footprint, India has to ensure that the internet stays free and safe for its users. Which is why the government brought about information technology laws last February. They also plan to expand on these set of laws keeping the safety of the internet users as their top priority. 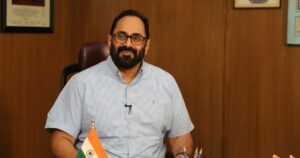 The opposition party did its job on questioning actions as Congress leader, Mr. Abdul Khaleque mentioned that although the internet as transformed the way humans live and society functions for the good; but, at the same time there is a lot of circulation of fake news, scams and many negative actions going on.

Mr. Chandrasekhar understood the oppositions grievances as freedom generally brews lawlessness but the government will still keep verification as optional. He assured the people that the new rules will be very effective in curbing digital lawlessness and ensuring the safety of people online.

The new rules entail the government hiring a third party to recognize the source of information during an investigation related to the sovereignty, safety and integrity of the country.

Congress Minister Manish Tiwari questioned the ruling government as to what exactly is stopping them from making social media verification mandatory. The main reason for keeping it optional as the government aims to balance safety as well as privacy.

The government also said that they are working hard to curb hate crimes and abuse people receive in social; especially the ones pertaining to women and marginalised groups.

The government truly believes that the privacy of the digital world and the revamped information technology rules which the government has introduced will synergize and help India in growing economically harnessing the potential of tech.

This is a forward-thinking policy and mindset that India has chosen to traverse. This kind of mindset hopefully will get carried through to make the internet the force it truly can be in India. These laws mean that India actually has more relaxed internet laws compared to other world powers such as China, the United States and Russia. India is slowly going the route of the European Union by allowing people to their own privacy.