The Defense Advanced Research Projects Agency (DARPA) has been working on an artificial intelligence system capable of fighting fighter jets. Recent reports indicate that in the recent tests, the system has been upgraded with commendable capabilities that will supposedly strengthen the defense stronghold in the future. 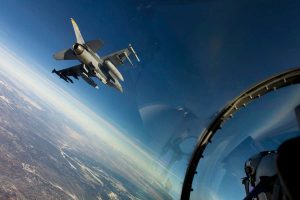 The competence of using artificial intelligence in defense and warfare has been a hot topic of discussion, involving agreements and disagreements, with inevitable safety concerns of trusting a machine with complexities of combat. However, the scope and efficiency offered by artificial intelligence which can considerably add to the sharpness of defense cannot be denied. AI has long been used for training, surveillance, cybersecurity and logistics.

In August, the Air Combat Evolution (ACE) program came to the limelight with the news of the AI system successfully defeating a human pilot in virtual dogfights, implying the probable future of AI in combat. And now this point has been stressed with DARPA adding new weapon systems and multiple aircrafts to virtual battles in the recent tests. These trials will make ACE capable of live, in-flight tests.

According to the reports from DARPA, the new additions will considerable increase clarity helping to build trust in the algorithms. In the words Col. Dan Javorsek, Program manager,

“These new engagements represent an important step in building trust in the algorithms since they allow us to assess how the AI agents handle clear avenue of fire restrictions set up to prevent fratricide. This is exceedingly important when operating with offensive weapons in a dynamic and confusing environment that includes a manned fighter and also affords the opportunity to increase the complexity and teaming associated with maneuvering two aircraft in relation to an adversary.”

One of the major scoring points that came from the testing is the addition of a second aircraft that allows the AI system to maneuver against. This is in contrast to the initial tests which involved one-on-one dogfights. The recent tests involved two F-16’s pitted against the AI system.

The initial tests were looked down upon, being dismissed as mere ‘AI theater’, that constituted just an entertaining show rather than an actual technological advancement. This was mainly due to the fact that in comparison to the amount of efforts and action fighter pilots carry out in combat, dog fights were simpler and far from, competitive. Added to this was the fact that the testing was limited to virtual environment.

Recent tests, however will considerably change this opinion with the addition of new capabilities which will enable the AI systems to play a significant role in the future of combat.