How to beat level 704 in candy crush

Candy Crush Saga is a free-to-play match-three puzzle video game that was first launched on Facebook on April 12, 2012, and then ported to iOS, Android, Windows Phone, and Windows 10. It’s a spin-off of their popular web game Candy Crush. 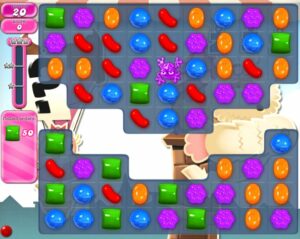 Players finish stages by swapping coloured pieces of candy on a game board to form a match of three or more of the same colour, then removing those sweets from the board and replacing them with new ones that might potentially generate additional matches. Matches of four or more candies produce special candies that function as power-ups, clearing the board faster.

Candy Crush Saga is widely regarded as one of the first and most successful freemium games; while the game can be completed without spending money, players can purchase special actions to assist them in clearing more difficult boards, which is how King makes money—at its peak, the company was reportedly earning nearly $1 million per day. Candy Crush Saga was played by over 93 million people in 2014, and the game generated over $493 million in revenue over a three-month period, according to King. The Candy Crush Saga series has over 2.7 billion downloads five years after its introduction on mobile, making it one of the highest-grossing and most-played mobile games of all time.

These Candy Crush Level 704 hacks will guide you through Candy Crush Saga level 704 with ease. Candy Crush level 704 is the 154th candy order level and the ninth level of Toffee Tower. You must gather 50 green candies in 20 moves or less to complete this level. You have 5 sweet hues and 63 spaces to work with. A maximum of 30,000 points may be earned.

Don’t be alarmed by the limited moves available. Instead, go around the board to see if you can come up with any unique sweets or gather green candies. If you’re using a mobile device, you may reset your board if you don’t like it. Color bombs are highly recommended for this level since they may swiftly charge the frog into Frogtastic mode or gather any existing green candies on the board if used on a green sweet. If you’re going to utilise the frog, attempt to use it on a 3*3 area with as many green candies as possible. To get more green candies to fall, use striped/wrapped or striped/striped combos to get rid of a lot of them.

The player has just 20 movements to gather an average of 2.5 green candies every turn. With only five colours and a pre-determined sugar frog, this level should be simple and straightforward. The order has a value of 5,000 points. As a result, earning one star requires an additional 5,000 points.