On Thursday, in an early treat for PUBG Mobile India, Krafton decided to launch the rebranded Indian version of the battle royale game – Battlegrounds India Mobile, albeit for Beta Testers only.

Battlegrounds Mobile India has been released for pre-registration on the Google Play Store for Beta Testers. As mentioned in the description on Google Play, players can opt out of the Beta testing and download the public version once it is available to them. 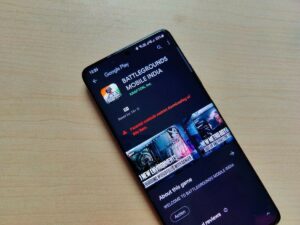 With the beta version of Battlegrounds Mobile India being rolled out for testing, it is highly possible that the battle royale game will be released for all interested players on 18 June.

Battlegrounds Mobile India will take an estimated 600MB on an Android device. However, if experts are to be believed, you will actually require a larger amount of space to run the game smoothly. Your phone needs to be on Android 5.1 or higher version, which means the game will be supported in all-new phones with the latest Android version. The RAM on your phone has to be at least 2GB, which is also something that a majority of phones will have. Because of RAM constraints, smartphones with Android Go software will not support the game. Also, for a seamless experience, a good internet connection is a must.

Recently, Krafton also stated that Battlegrounds India Mobile has more than 20 million Pre-Registration users in India alone. The registration of Battlegrounds India Mobile was rolled out on May 18 for Android users. It is available on Google Play Store. Krafton also rolled out India-centric rewards on pre-registration of the game that can be claimed when the game will eventually be launched in India. These games include Recon Mask, Recon Outfit, Celebration Expert Title, in-game currency, and 300 AG.

To pre-register, do the following