The Ratchet and Clank Rift Apart best armour sets will help you to survive in the various dimensions you travel through over the course of the game’s narrative. Each armour piece is modular in the game so they can be swapped with other sets and even edited by colour.

When you go about collecting armour while playing the game, you will also get access to special bonuses that are attached to the sets. This will offer buffs to resource gathering, damage, and survivability.

In this guide, we are going to discuss the most important bonuses in the game and show you how to find the corresponding armour pieces. 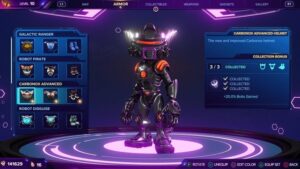 You will have to complete ‘A Grunthor Named Sue’, which is the final challenge of the Bronze Cup at Zurkies. It will be accessible when you first visit the arena.

For the chest piece, you need to defeat Scolo, which is part of the ‘Revenge of the Seekerpede’ challenge. This is the final bout in the Silver Cup at Zurkies. This will be accessible only after you complete the Cordelia level.

You need to finish the ‘Twice as Nice’ challenge to get the final piece. This is a boss-rush battle and is the last part of the Gold Cup at Zurkies. You will get access to it only once Rivet and Ratchet meet up at Zurkies in the endgame.

Another important set in Rift Apart is the Captain Starshield set, which allows you to earn extra XP up to +20%. This is good news if you want to hit Level 10 before the story ends and increase your health pool. If you are struggling in terms of combat, collecting some of these parts early can prove to be very helpful. 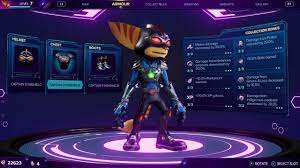 Helmet
On the southeast rim of the Savali map, the helmet is located inside of a Pocket Dimension. You will have to dash along the walls to reach it.

Chest
On Cordelion, you will have to escape to another dimension using a Blizar crystal when trying to escape a monster. The second time this happens, the piece can be found in a Pocket Dimension nearby. It is important to note that all Pocket Dimensions appear on your map when you get close, so they are relatively tricky to miss.

Boots
The boots are located in a Pocket Dimension underneath the main bridge leading to Pierre on the Pirate planet of Ardolis.